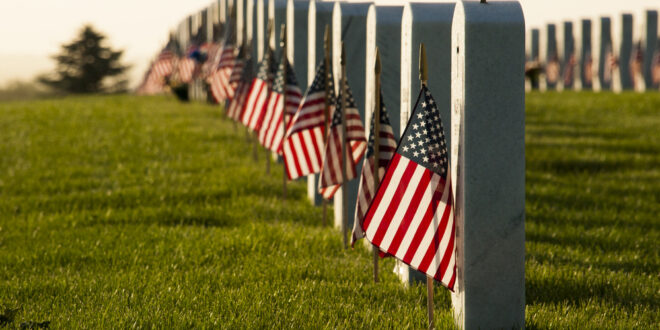 I married into Memorial Day traditions.

Like most Americans, I grew up with a Memorial Day viewed as a long weekend at the start of summer season and not a sacred commemoration of the country’s war dead.

My family would go to the beach, maybe camp, at least picnic. My father was a World War II veteran but never suggested we observe the holiday as it was intended.

That is understandable. There has always been some confusion surrounding Memorial Day.

A century of debate between the post-Civil War North and South over the nature of the holiday contributed to that.

Historians trace the holiday back to southern traditions. For years after the Civil War, it was celebrated in the South as Confederate Memorial Day. Northern commemorations were slower to develop, and it was left to local communities to establish traditions for the remembrance of Northern dead on what was called Decoration Day.

In both North and South, the holiday was almost always celebrated in May, on varying days but most frequently on May 30, probably because flowers would be in bloom, so families could easily decorate graves.

Congress did not officially name the holiday Memorial Day until 1968 and then moved the observance to the last Monday in May to produce a three-day weekend. That took effect at the federal level in 1971 and was eventually accepted by all the states.

But veterans’ groups still object to that designation, arguing a date chosen to produce a long weekend disrespects the war dead. Legislation is introduced frequently to move the holiday back to May 30.

When Memorial Day Became a Day to Honor All Dead

Less clear is when the day’s tributes extended to all those who have died, not just military casualties.

So, for any number of reasons, the day has two meanings.

The first involves commemoration of the dead, most notably war dead. Graves are decorated with flowers and flags, some communities hold parades and families gather to remember those who have passed.

The second involves celebration of a three-day weekend and the start of summer fun. There are picnics and campouts and barbecues.

And from the beginning, just after the Civil War, older Americans have accused younger Americans of forgetting the holiday’s purpose. We still hear those complaints.

I cannot say precisely when I accepted the holiday as a tribute to the dead rather than a weekend to party.

I think it was when my father lay dying and he talked about how he willingly would have sacrificed his life in the Great War.

“I was prepared to die then, and I’m prepared to die now,” he told us. It was the bravest thing I ever heard from him. He had shared that willingness to sacrifice so central to our military for three centuries.

So that is when I began flying the American flag on Memorial Day – and Veterans’ Day, and the Fourth of July, for that matter.

On his death, my dad was cremated. Some of his ashes rest in a vault at the Willamette National Cemetery in Portland. Some were distributed by my son and nephews at Masada, the ancient Jewish fortress in Israel.

Because of time and distance, I am rarely able to visit the Portland cemetery and have never been there on Memorial Day. My mother, younger brother and sister were also cremated, and their ashes spread in favorite places. All of which means I am not able to decorate my family graves on Memorial Day.

But it is a different story for my dear Carla’s family.

When we first came together, I would join Carla and her mother as they visited two Spokane cemeteries to place flowers on the grave of her father, the grave of a brother who died shortly after birth and on the graves of uncles, aunts and cousins. It took some time.

When Carla’s mother died in 2013, my wife said she would end the tradition, that she would not visit the cemeteries again.

But a few days before Memorial Day in 2014, she loaded up on flowers and we made the visits, as I knew we would. She would not abandon her family’s tradition. We have been going ever since.

It is a solemn occasion for us. For reasons beyond our understanding, the weather is generally grey and wet. That always feels right.

My father served in the Navy during the war. So, remembering him on Memorial Day is appropriate. But we also honor Carla’s father whose story could not be more different. He was a teenage steward on an Italian cruise ship seized by the U.S. the day after Pearl Harbor. He spent the war in a POW camp in Missoula, and after the Italian surrender was given a choice – stay in the U.S. or go back to Italy.

He stayed. Carla says he knew his life had been saved when he became a prisoner. In Italy, he would have been cannon fodder for the fascist war machine.

He became an American citizen, and a proud one, working to be more American than most. He loved American traditions, loved American holidays, and introduced Carla to the most American Elvis Presley, fueling her lifelong obsession.

He was a good man and Memorial Day is for him, too.

Passing on My Understanding of Memorial Day

When I was still teaching, I tried to explain to my students the meaning and importance of Memorial Day and Veterans’ Day. They listened and some, I think, came away with a better understanding.

Next Sunday, Carla and I will visit the cemeteries. I will fly the flag. And even though I will probably barbecue some burgers, we will not lose sight of the day’s meaning.

It is, after all, a day to honor our dead.

Previous Change your Boring Lifestyle with These 5 Faithful Tips.
Next How the ‘apocalyptic’ Southern Baptist report almost didn’t happen