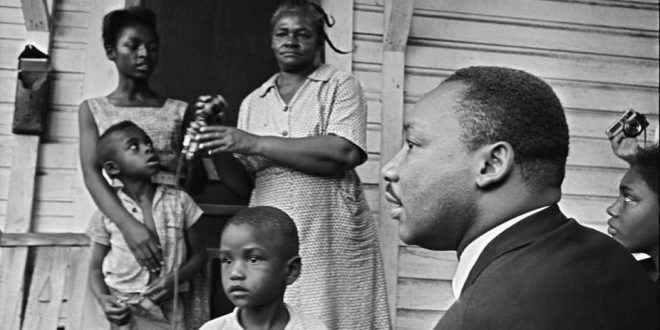 Meet the theologian who helped MLK see the value of nonviolence

After this last tumultuous year of political rancor and racial animus, many people could well be asking what can sustain them over the next coming days: How do they make the space for self-care alongside a constant call to activism? Or, how do they turn off their phones, when there are more calls to be made and focus instead on inward cultivation?

As a historian of American race and religion, I have studied how figures in American history have struggled with similar questions. For some, such as the philosopher and naturalist Henry David Thoreau, the answer was to retreat to Walden Pond. But for the African-Americans who grew up with the legacy of segregation, disfranchisement, lynching, and violence, such a retreat was unthinkable. Among them was Martin Luther King Jr.

On this anniversary of King’s birthday, it’s worth looking at how King learned to integrate spiritual growth and social transformation. One major influence on King’s thought was the African-American minister, theologian, and mystic Howard Thurman.

The influence of Howard Thurman

Born in 1899, Thurman was 30 years older than King, the same age, in fact, as King’s father. Through his sermons and teaching at Howard University and Boston University, he influenced intellectually and spiritually an entire generation that became the leadership of the civil rights movement.

Among his most significant contributions was bringing the ideas of nonviolence to the movement. It was Thurman’s trip to India in 1935, where he met Mahatma Gandhi, that was greatly influential in incorporating the principles of nonviolence in the African-American freedom struggle.

At the close of the meeting, which was long highlighted by Thurman as a central event of his life, Gandhi reportedly told Thurman that “it may be through the Negroes that the unadulterated message of nonviolence will be delivered to the world.” King and others remembered and repeated that phrase during the early years of the civil rights movement in the 1950s.

Thurman and King were both steeped in the black Baptist tradition. Both thought long about how to apply their church experiences and theological training into challenging the white supremacist ideology of segregation. However, initially their encounters were brief.

Thurman had served as dean of Marsh Chapel at Boston University from 1953-1965. King was a student there when Thurman first assumed his position in Boston and heard the renowned minister deliver some addresses. A few years later, King invited Thurman to speak at his first pulpit at Dexter Avenue Baptist Church in Montgomery.

Ironically, their most serious personal encounter, that gave Thurman his opportunity to influence King personally, and help prepare him for struggles to come, came as a result of a tragedy.

A crucial meeting in hospital

On Sept. 20, 1958, a mentally disturbed African-American woman named Izola Ware Curry came to a book signing in upper Manhattan. There, King was signing copies of his new book, “Stride Toward Freedom: The Montgomery Story.” Curry moved to the front of the signing line, took out a sharp-edged letter opener and stabbed the 29-year-old minister, who had just vaulted to national prominence through his leadership of the Montgomery bus boycott.

King barely survived. Doctors later told King that, if he had sneezed, he easily could have died. Of course, King later received a fatal gunshot wound in April 1968. Curry lived her days in a mental institution, to the age of 97.

It was while recuperating in the hospital afterward, that King received a visit from Thurman. While there, Thurman gave the same advice he gave to countless others over decades: that King should take the unexpected, if tragic, opportunity, to step out of life briefly, meditate on his life and its purposes, and only then move forward.

Thurman urged King to extend his rest period by two weeks. It would, as he said, give King “time away from the immediate pressure of the movement” and to “rest his body and mind with healing detachment.” Thurman worried that “the movement had become more than an organization; it had become an organism with a life of its own,” which potentially could swallow up King.

King wrote to Thurman to say, “I am following your advice on the question.”

King and Thurman were never personally close. But Thurman left a profound intellectual and spiritual influence on King. King, for example, reportedly carried his own well-thumbed copy of Thurman’s best-known book, “Jesus and the Disinherited,”in his pocket during the long and epic struggle of the Montgomery bus boycott.

In his sermons during the 1950s and 1960s, King quoted and paraphrased Thurman extensively. Drawing from Thurman’s views, King understood Jesus as friend and ally of the dispossessed – to a group of Jewish followers in ancient Palestine, and to African-Americans under slavery and segregation. That was precisely why Jesus was so central to African-American religious history.

Thurman was not an activist, as King was, nor one to take up specific social and political causes to transform a country. He was a private man and an intellectual. He saw spiritual cultivation as a necessary accompaniment to social activism.

As Walter Fluker, editor of the Howard Thurman Papers Project, has explained, the private mystic and the public activist found common ground in understanding that spirituality is necessarily linked to social transformation. Private spiritual cultivation could prepare the way for deeper public commitments for social change. King himself, according to one biographer, came to feel that the stabbing and enforced convalescence was “part of God’s plan to prepare him for some larger work” in the struggle against southern segregation and American white supremacy.

In a larger sense, the discipline of nonviolence required a spiritual commitment and discipline that came, for many, through self-examination, meditation and prayer. This was the message Thurman transmitted to the larger civil rights movement. Thurman combined, in the words of historian Martin Marty, the “inner life, the life of passion, the life of fire, with the external life, the life of politics.”

King’s stabbing was a bizarre and tragic event, but in some sense it gave him the period of reflection and inner cultivation needed for the chaotic coming days of the civil rights struggle. The prison cell in Birmingham, Alabama, where in mid-1963 King penned his classic “Letter from Birmingham Jail,” also accidentally but critically provided much the same spiritual retreat for reflections that helped transform America.

The relationship of Thurman’s mysticism and King’s activism provides a fascinating model for how spiritual and social transformation can work together in a person’s life. And in society more generally.

Previous Why we should be troubled by Trump’s “shithole countries” comments
Next More than 3,000 take to Spokane streets for MLK Day