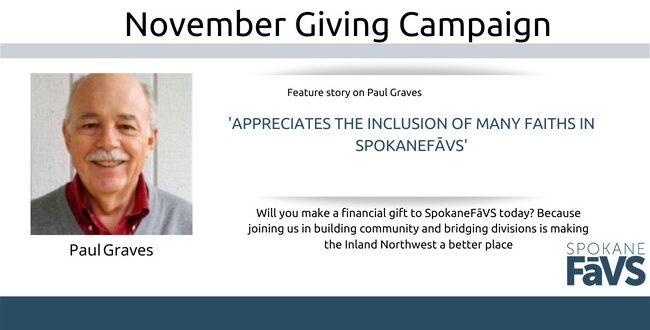 Paul Graves was 15 when he gave his first sermon at his local church and a few years later he decided to become a pastor.

A retired United Methodist pastor, he has been writing columns for the Spokesman-Review reflecting his passion for religious and social inclusiveness since March 1996.

“When I left parish work in 1995, I discovered that I was really missing that sense of ordering of my life, and the Spokesman-Review at that time did not have a local columnist or what they at that point called a religion page,” Graves said.

Graves wrote for the Faith and Values section of the Spokesman-Review before also contributing to SpokaneFāVS. He said SpokaneFāVs executive director Tracy Simmons made a few comments about his columns for the Spokesman because they shared the space on Monday and got acquainted.

“I don’t remember whether she asked me or I asked her about putting my columns [in SpokaneFāVS] and anyhow it’s been a fun ride with her,” he said.

“I’m trying to bring a perspective of spiritual wholeness to that to those kinds of distress that we all experience,” he said.

Graves said he appreciates the inclusion of many faiths in SpokaneFāVS. While he is writing primarily from a Christian perspective, he said it is a humbling honor when readers of other faiths write to him, thanking Graves for anything he said in his columns.

Aside from being a columnist, Graves was a geriatric social worker following his 27 years as a parish in Sandpoint, Idaho. However, he stepped away from social work in 2005 and started his own consulting ministry where he consults with older adults and adult children.

In June 2015, he published his first illustrated children’s story, “Sox Looks for Home”  based on a true story of the Graves family cat named Sox. Graves is currently writing a purely fictional, second Sox adventure, “Sox Meets Harold the Moose: An Unlikely Friendship.”

Previous Ask a Muslim: Is Wearing a Hijab OK if Not a Muslim?
Next The Crucibles of Life Mold Us for Better and Worse