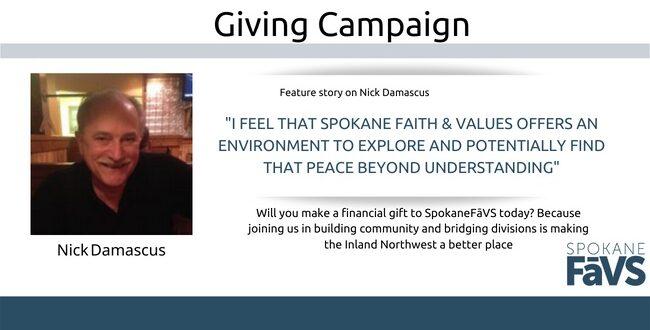 In his spare time, he was attending 10 Bible studies a week, learning, for the most part, what was being taught and what wasn’t.

After meeting Tracy Simmons and being interviewed by SpokaneFāVS, Damascus said he was encouraged to write about the teachings and traditions of the Eastern Orthodox Church.

When it comes to the Eastern Orthodox Church, Damascus said it is not a religion, but rather a way of life.

“It is not about rules and regulations, but rather guideposts to make choices to improve one’s life by becoming what we were designed to become,” he said. “Christ says I am the Way (to love and serve one another), the Truth (there is only one reality) and the Life (that life source is love).”

Damascus said it’s been a privilege and honor since 2014 to present the teachings of the ancient faith as it was handed down from Christ and the Apostles without any additions, subtractions or alterations.

Among all of the columns he has written for SpokaneFāVS, there is a major recurring theme that appears throughout them. In becoming Orthodox, he said one cannot jump from academic theology and achieve spiritual enlightenment/illumination.

“It’s not about the intellect; it’s about the condition of the heart (in Greek, the nous),” he said.

Damascus said becoming Orthodox is not a conversion, but more of a transformation of self. It’s a journey where one, through their expressions of love, strives to live a moral life in the likeness of Christ.

“Often in this world, it is our autonomous prideful self (perpetuation of the fall) that inhibits us from achieving this state of being,” he said. “It’s not about being right; it is about ‘right being’.”

SpokaneFāVS is important because Damascus said people often feel unfulfilled, unsatisfied and frustrated, searching to find a meaningful faith and place where they feel at home.

“I feel that Spokane Faith & Values offers an environment to explore and potentially find that peace beyond understanding,” he said.

Damascus invites people to submit any topics or questions under the “Ask” heading in the main menu of SpokaneFāVS’s website and click on “Ask an Eastern Orthodox Christian.”

u greeks are funny, u worship a Jewish god

We do have a sense of humor. So my question to you is was God Jewish before all of creation?