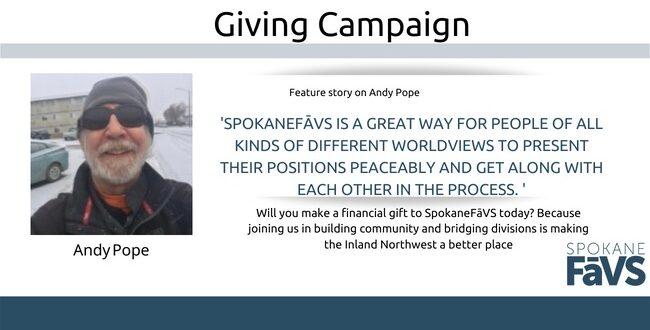 Andy Pope is a columnist for SpokaneFāVS and musician who wrote the musical score “Eden in Babylon” while homeless.

It all began in 2004 after a costly misdiagnosis regarding his mental health took a toll on him, he explained. Medications that were intended to help him led him to making erratic decisions. Between October 2003 and May 2004, Pope lost everything, including $50,000 annual income and the $13,000 he had in his bank account.

“My health didn’t improve till I ditched the pills, but unfortunately I’d already lost everything by that time,” he said.

For about seven years, Pope would land-and-lose living situations, not being able to hang on to them for one reason or another. Then, on April 15, 2011, Pope became “homeless by choice” and joined an intentional homeless community in Berkeley, California.

Because he couldn’t afford to live alone and couldn’t handle living with other people, homelessness became his preferred lifestyle for the next five years. It was during that time he wrote the score for his musical.

However, as he aged, Pope said the lifestyle became more difficult. On July 27, 2016, Pope got off a bus in Moscow, Idaho, and began a new life. He has not gone back to California or to the streets since then. The one thing that changed was the cost of rent.

The one-bedroom apartment in Idaho cost him less than $500. The same kind of apartment would cost him $3,000 in the San Francisco Bay area. He would still be homeless if he lived in California right now, he said.

Being homeless completely changed his worldview. What homelessness did for him, sitting on a sidewalk and observing the conversations of those who lived indoors, was provide him with a transcendence of the Left-Right model.

“No matter how badly we all disagree with each other on this planet, I think we should first mutually figure out how not to destroy ourselves, and then take it from there.,” Pope said. “Every column I have posted on FāVS has in some way been informed by my homeless experience. Homelessness has a way of changing one’s life-priorities.”

Pope added he is much less attached to mainstream American values and societal expectations than he was before he was homeless.

“Homelessness is THE greatest gift that God has ever given me,” he said.

Pope said SpokaneFāVS is a great way for people of all kinds of different worldviews to present their positions peaceably and get along with each other in the process.

“I’ve never encountered a forum before where people from such diverse walks of spiritual life can coalesce,” he said. “I’m honored to be able to air my views on FāVS.”

He said people should be drawn toward SpokaneFāVS because of its uniqueness and potential to positively impact its readers.

Previous Denominational Distinctions Divide Us
Next After All these Years, I Have a Pet