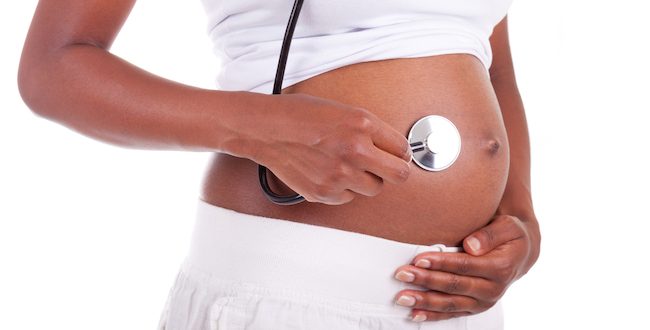 Young pregnant black woman listening her belly with a stethoscope/DepositPhoto

According to Joni Seager, every year over half a million women die worldwide due to pregnancy-related causes. In a recent study by NPR and ProPublica, they found that deaths from pregnancy-related causes are more common in the United States than in any other developed country, and that this is the only developed nation in which those rates are rising. In 2003 in the United States, per every 100,000 births, 31 African American mothers died and eight white mothers died.  The U.S Census of that same year shows that 80.5% of the population identified as white while 12.8% identified as black or African American, demonstrating that the mortality rate for black and African American mothers was extremely disproportionate.

As a white Christian woman, I am familiar with rhetoric about poor and uneducated black women finding themselves faced with unexpected and dangerous teen pregnancies. This is based less on the truth and more on white Christian guilt seeking an explanation for the above statistics that incriminates the victim rather than a racist system in which we are complicit.

For example, consider another recent study by the Center for American Progress which found that “African American women are three to four times more likely to die from childbirth than non-Hispanic white women, and socioeconomic status, education, and other factors do not protect against this disparity. Instead, sexism and racism are primary drivers.” After controlling for “income; gestational age; and maternal age and health status, the odds of dying from pregnancy or delivery complications were almost three times higher for African American women than they were for non-Hispanic white women.” The study suggests that, all other factors being equal, African American mothers receive lower quality care than their non-Hispanic white counterparts.

Arline Geronimus studied public health research at Princeton and now speaks out about the effects that racism has on black mothers’ mortality. Often, researchers focus on educating young black women to prevent teen pregnancies or attribute complications to genetics or lack of access to health care. Geronimus says that we ought to be paying more attention to societal assumptions and the ways American healthcare systemically disadvantages minority groups. Mothers like Elise Salazar are denied epidurals and told to be quiet when crying out in pain, and even famous and wealthy black women who can afford quality health care like Serina Williams and Beyoncé are denied autonomy in their care decisions, leading to dangerous and nearly deadly birth experiences. As Rochaun Meadows-Fernandez says while reflecting on her own birth experience, reasons for high mortality rates among pregnant black women “include an inherent bias against black women, the assumption that we are not knowledgeable about our own health, and old-school misconceptions about black people’s ability to tolerate pain.” While providing quality sex education to young people is certainly important, more emphasis needs to be put on diversity training for healthcare providers and better legal protections for mothers of color so that they cannot be denied consent during treatment and labor.

Further, those of us white folks who think that we’re the “good ones” need to evaluate the ways that we support and benefit from the system that so severely disadvantages our black sisters. We cannot turn a blind eye to this violence nor blame the mothers and infants who are suffering from it. If the care that mothers of color are receiving is to change, then the narrative surrounding their mortality must shift. So, it is on us white folks to evaluate our own internal narratives and shift the rhetoric so that we cannot blame the victims of this violence anymore.

Previous Poll: Americans rarely seek guidance from clergy
Next Ask A Muslim: Having a Muslim Friend Over

On this holiday, let’s vow to heal America