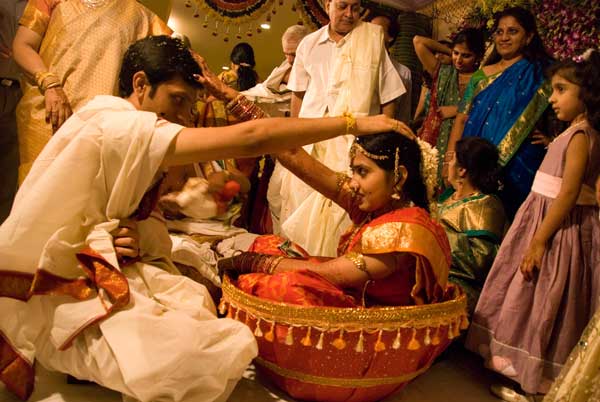 Kamna Mittal and her husband moved to the Bay Area soon after they were married in India in 2000. In addition to being in a new country, the couple were new to each other. Their marriage had been arranged.

“When you go for an arranged marriage,” she said, “it's a total gamble.”

Now a mother of two, Mittal counts herself lucky that it worked out, but 12 years later, she wants to help Indian-American singles in the Bay Area meet directly.

Turns out even love can use a little help every now and then, and the age-old practice of arranged Hindu marriages is getting a 21st-century makeover.

Sapna Thakur, 34, recently moved to the Bay Area and attended Mittal's first mixer in February, a Valentine's Day-themed singles party. “Why not? Give it a shot,” she thought before going.

“It was a bit awkward in the beginning but then it was fine because there were a lot of games and people were mingling. I had a nice time.”

The marriage process is in flux in Indian-American culture, opening the door to new avenues for matchmaking. Even as singles' attitudes on dating change, Hindu tradition still holds sway through mixers, matrimony websites and matchmakers.

Within Indian culture (which is predominantly Hindu), marriage is as much about families coming together as it is about couples coming together. Hinduism orders families into four major castes and thousands of sub-castes, each with their own particular ritual role or profession. Ideally, a couple must be in the same sub-caste, region and religion. Priests also compare their horoscopes to ensure compatibility.

Especially in Indian villages, matchmaking tends to be informal, using “extensive kinship networks,” said Lindsey Harlan, chair of religious studies at Connecticut College. When an Indian gets to a marriageable age, “aunties,” who are not necessarily related, start looking out for potential life partners.

A family also might hire a marriage broker to help the process along. These days, matrimony websites can serve the same broker role as the “aunties.”

Parents, both in India and in the U.S., create profiles listing their children's personal and familial information — including caste and religion — on sites like Bharatmatrimony.com, which has more than 20 million profiles worldwide.

The website's CEO, Murugavel Janakiraman, said 10 percent of clients are immigrants to the U.S. or American-born Indians.

“There have been a lot of more modern inventions trying to achieve the same goal as matchmaking by 'aunties,'” Harlan said. Such inventions, she said, are “a reaction to the fear that kids will make inappropriate choices and suffer the same divorce rates that the (U.S.) does in general.”

Parties like Mittal's can serve to either continue or break tradition: Singles might click with somebody outside their caste, or they could meet more of “the kind of people that your parents would like you to marry” than they might in everyday life, Harlan said. 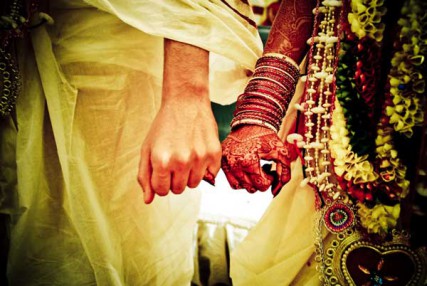 Thakur's parents encouraged her to go the singles party, even though they had wanted to arrange a marriage for her when she was younger. Now that she's older, her father is more open-minded about who his daughter marries — “but it has to be an Indian,” she added, and preferably from one of the higher castes.

Thakur herself is also more open to arranged marriage than she was when she was young.

“When you're working, it's really difficult to meet people,” Thakur said. “You go there, you meet someone. You can meet them a few times. It's basically semi-arranged.”

Thakur's desire to marry reflects Indians' traditional values at a time when only 51 percent of American adults are wed, according to 2010 Census data.

“It's not like a flirty or just everyday kind of party,” Mittal said. “From the girls' side or boys' side, they are both serious about finding a life partner.”

Indian immigrants tend to look for the same religion, caste and region, Mittal said. American-born Indians might want somebody who is Indian, preferably raised in America, too. Ninety percent of Hindus in America marry within the faith, according to the U.S. Religious Landscape Survey by the Pew Forum on Religion & Public Life.

“I've seen so much that blows those stereotypes out of the water,” said Jasbina Ahluwalia, a Bay Area matchmaker who serves the South Asian community. Still, culture can add a burden to dating.

“Separating one's own priorities and values from expectations of others — family, parents — I think can be very challenging,” she said.

Even if parents approach her, as they sometimes do, the first consultation must be with the single person, in private. “If someone says, 'I want to find another Indian,' I ask why,” she said.

Ahluwalia doesn't necessarily advocate a wholesale break with tradition, but clients need to have thought through their answers. If a woman says she wants to marry a Hindu, for instance, Ahluwalia asks what that means: Going to temple each week? Simply being spiritual?

Thakur is willing to look within the parameters set by her parents, but she has her own priorities: physical attraction, education, good employment and stability. She didn't meet anybody she liked at Mittal's party.

“I guess you become more fussy when you get older,” she said.