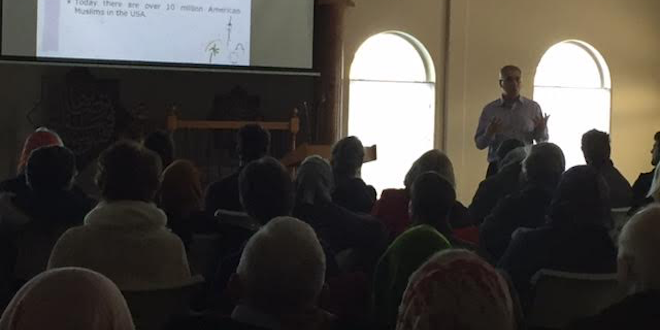 It was standing-room only at the Spokane Islamic Center’s first open house Saturday. The parking lot overflowed with cars, while others trekked the snowy streets leading up to the mosque. Full shoe racks in the entrance turned into wet piles of boots and sneakers on the floor, while inside, all seats were taken, and the walls were lined with Muslims and non-Muslim community members alike.

Saleh Elgiadi, co-organizer of the open house and president of the ICS, said the event was an opportunity for neighbors to get together and learn about each other.

And much like a classroom, learning took place. Powerpoint presentations on the Islam faith were led by Mamdouh El-Aarag and Kawkab Shishani.

El-Aarag spoke on the six pillars of faith. Belief in: God (Allah); angels; God’s revealed books; the prophets and messengers of God (Muhammad is the last of prophets); Day of Judgement; and divine predestination. He also urged the importance of giving Zakat — or charity.

“How can you grow with a stomach full, when your neighbor is hungry?,” he asked.

Shishani presented on topics ranging from marriage, women’s rights and the hijab.

“Hijab is a way of life,” she said. While some may see the head cover as restrictive, her hijab has given her liberation, she said.

With only her face and hands to show, she said she’s more focused on her work than her appearance. Shishani is an assistant professor in the College of Nursing at Washington State University-Spokane.

She also emphasized marriage as a contract. “Each family defines what works for them,” Shishani said.

Presentations were followed by a question-and-answer session led by Elgiadi.

One man stood to mention an excerpt of the Qu’ran that references killing infidels (people who practice faiths other than Islam) and thus being awarded 72 virgins in heaven.

Elgiadi emphasized the script was situational, and took place in a historic battle. It may have made sense then, but it doesn’t now.

“Some people take the Qu’ran and pull it apart,” he said. “They take it out of context.”

The same, he said, could be done with violent passages of the Bible.

Elgiadi, who has stepped in as a sort of leader while the center is without an imam, demonstrated different bows and explained the power of prayer, despite a sore back. He then handed it over to a long-practicing mosque member who led Muslims and willing participants in prayer. Because of a slow start and the large turnout, noon prayer occurred closer to 1 p.m.

“I’ve almost been moved to tears the entire day,” said Sherazi, who was overwhelmed by the turnout and also helped coordinate the food offered as a finale to the event. Lentil soup, curried chickpeas and baklava were among a table full of worldly foods.

If this is the turn out on three-weeks notice, she said, she can’t imagine the response for long-planned Meet the Neighbors, which will occur 6 p.m. Jan. 19 again at the Islamic Center.
SpokaneFAVS news writer Lindsey Treffry can be reached at lindseytreffry@gmail.com or on Twitter @LindseyTreffry.