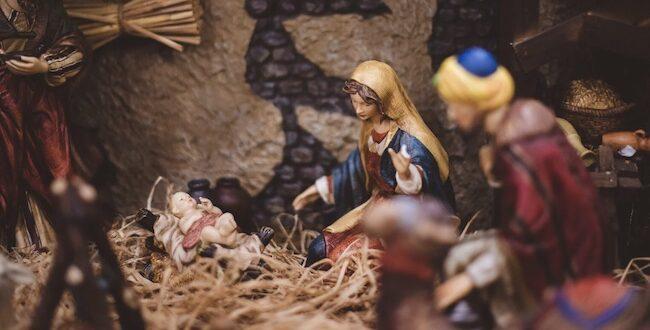 A manger scene with the focus on Mary and baby Jesus. Photo by Ben White/Unsplash/Creative Commons

For Mark Lowry, almost every day is Christmas.

Whenever the storyteller and singer takes the stage for a concert, he always closes the show with the same song — “Mary Did You Know?” — no matter what time of year it is.

“When you have one hit, you better end with it,” Lowry said in a recent phone interview.

Lowry co-wrote “Mary Did You Know?” with Buddy Greene, a well-respected songwriter and instrumentalist, in 1991, while both were on tour with famed gospel singers Bill and Gloria Gaither. Recorded first by Christian singer Michael English, the song has become a modern Christmas staple — covered by some of the biggest names in the business: Dolly Parton, Kenny Rogers and Wynonna Judd, Mary J. Blige, Clay Aiken, Carrie Underwood and the a cappella vocal group Pentatonix.

The idea for the song dates back to conversations the 63-year-old had with his mother about Jesus and Mary. Most revolved around the question: What was it like to raise the son of God?

“Literally, what was it like teaching the Word of God to talk,” he said, referring to a title used for Jesus in the Gospel of John. “What was it like to give him a haircut? Did she ever walk into his room and say, ‘clean this mess up’?”

He added that most of the questions he had did not make their way into the song — only the ones that rhymed made it.

Those conversations also touched on spiritual topics, like the mystery of the incarnation, said Lowry — the Christian belief that God became human in the person of Jesus. They eventually inspired a series of short monologues Lowry wrote in 1984 for a Christmas concert at Thomas Road Baptist Church in Lynchburg, Virginia, then led by the Rev. Jerry Falwell. Those monologues were the glue that held the show together, serving as a transition from one Christmas song to another.

They stuck with Lowry, who thought they might work for a song if he could find the right music. Several musicians tried to come up with melodies, but none fit, said Lowry. Then, while on tour with the Gaithers, he showed the lyrics to Greene and asked him to have a go. Greene took them home and started working on some music. Lowry recalls that Greene, who could not be reached, had spent a day listening to Christmas carols written in minor keys, like “What Child is This?” and “We Three Kings” before composing the melody for “Mary Did You Know?”

“It was beautiful,” he said. “It was haunting, and it made the song work. It didn’t take away from the message — it elevated the message.”

While writing lyrics, Lowry said he imagined himself as an overly enthusiastic angel who showed up at the manger during the Christmas story and was filled with questions. He used the phrase, “Did you know” to express that enthusiasm — as if the angel was bubbling over with joy for what the birth of Jesus meant. The questions in the song are the questions Lowry would have asked if he had been there.

But that phrase has gotten Lowry in trouble in recent years — seen as a kind of theological mansplaining.

“Listeners have complained that, yes, Mary knew that she was going to bear the Messiah, the promised salvation of Israel, and that, therefore, the rhetorical question upon which the song rests is either redundant or condescending,” author Joy Clarkson, host of the “Speaking with Joy” podcast, wrote in a 2018 article entitled, “Yes, Mary Knew.”

That phrase has also inspired a series of sarcastic social media posts. “Mary did you know … that there’s a boy on his way to gift your newborn with a drum solo,” tweeted author and pastor Courtney Ellis. “Mary did you know we’ve been trying to reach you about your extended warranty,” tweeted Texas attorney Robert Callahan II. There’s even apparently a satire of the song, entitled “Mary Freaking Knew.”

Lowry is pretty good-natured about the criticism of the song. He’s quick to admit it has shortcomings — which he thinks are more evident to his fellow Christians who are more familiar with theology than the average person who hears the song. The last thing he wanted to do was to insult Mary or anger his fellow believers.

“I never meant for it to start a war or irritate people,” he said. “I definitely didn’t want that.”

That response fits Lowry’s character. He’s long used humor to help his fellow evangelicals lighten up, preferring laughter to a fight any day.

“We’ve portrayed to the world that we’re superhuman beings, and we’re not,” he told Religion News Service in a 1999 interview. “We’re just sinners in need of a savior.”

Still, he’s grateful for what he called the “miracle of the song.” Lowry, who has never been married, views his songs as his children. None of them, he said, has grown and had a life of their own the way “Mary Did You Know” has. Most of all, he hopes the song will point people to the story of the baby Jesus and what his arrival would mean.

“I hope the song makes people think about the baby Jesus,” he said. “I hope it sends them running to Luke 1 to find out what Mary knew.”