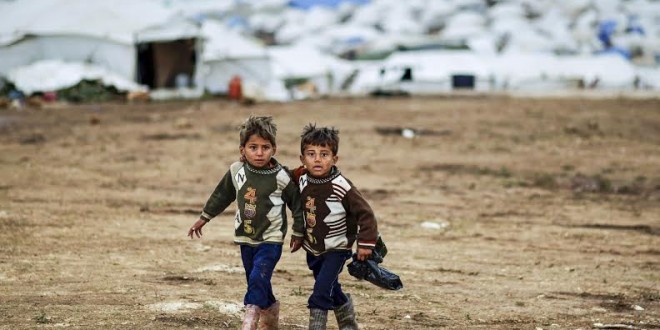 Syrian boys, whose family fled their home in Idlib, walk to their tent, at a camp for displaced Syrians, in the village of Atmeh, Syria, Monday, Dec. 10, 2012

Marseille, Torah, and loving the (stran)ger

On Nov. 8, Spokane’s Jewish community celebrated Global Day of Jewish Learning. This year’s theme had to do with love, and Rabbi Tamar Malino led a Torah-study session called “Loving the Ger: Who is the Stranger in our Midst?” The first passage we looked at was Exodus 22:20-21: “You shall not wrong a stranger or oppress him, for you were strangers in the land of Egypt. You shall not ill-treat any widow or orphan.” We then examined Leviticus 19:34: “The stranger who resides with you shall be to you as one of your citizens; you shall love him as yourself, for you were strangers in the land of Egypt: I the Lord am your God.”

You were strangers. We have been strangers in so many lands over the millennia. We’ve been made to feel as though we didn’t belong, denied the rights others earned simply by being born. We have even been strangers in America, so many Jews’ promised land during World War II. The U.S. was worlds better than the Third Reich, of course, but this country has expressed its share of anti-Semitism, discrimination, and bigotry. Whatever one may think of Israel’s history and present-day situation, we were strangers there after World War II, as Jewish resettlement in that land faced some hefty opposition. We have definitely known what it is to be the stranger. Even today our sense of belonging, of being safe, can feel tenuous at best.

Ten days after Spokane’s Global Day activities, I learned that a Jewish teacher in Marseille, France, had been stabbed by three individuals who claimed to be supporters of Daesh (aka ISIS). Based on information from Reuters, the New York Times reported that “the three people were riding on two scooters and that one of them was wearing an Islamic State T-shirt. They approached the teacher at about 8 p.m., shouted anti-Semitic insults at him and stabbed him in the arm and the leg….” The Times added that “the teacher’s injuries were not life-threatening,” but the assault succeeded in adding fuel to the fire of fear.

Less than a week before the Marseille attack, Pope Francis referred to the terrorist attacks in Paris as part of a “piecemeal World War III.” Throughout my life, the phrase “World War III” has had a quasi-mythical resonance. WWIII would be the end of the world, and it would be nuclear. Afterwards, the planet would look like something from “Mad Max.” People’s silhouettes would be burned on the walls they stood near when the blast occurred. Cockroaches would survive, but little else.

I don’t agree that World War III has begun. However, when I think about sudden, blatantly anti-Semitic violence, such as happened in Marseille, World War II does come to mind. It must for the grandson of a Holocaust survivor. In the aftermath of the Marseille attack, I empathize with fellow Jews around the world who fear that a kind of World War III is already here. Not an apocalypse marked by mushroom clouds but a nightmarish return to the climate of anti-Jewish violence that directly preceded the Holocaust.

I don’t think we will be hunted and massacred again the way we were in the 1930s and ’40s. Maybe I’m naive and simply can’t handle seeing that as a real possibility. In any case, I understand why some Jews, especially those who are older than me and thus closer psychologically to the Holocaust, might be very afraid.

I do agree with the pope’s statement that attacks such as those we saw in Paris “are hard to understand.” Now is a fine time for us all to pay attention to world news, use critical thinking as we do so, and make an effort, where we are, to foster love and acceptance, perhaps especially toward people who are different from us. Despite what Donald Trump might want you to believe, now is not the time to defy God’s word and reject the stranger. Instead, it’s the perfect time to treat refugees — many of whom are surely widows and orphans — as our own citizens. It’s time to love them as ourselves, even if that means risk and fear, even if it feels like piling uncertainty upon uncertainty.

As someone who prioritizes personal safety and is easily made anxious, I know that trusting only the people you already know is the easier route to take. But if our country, cities, and neighborhoods are to exhibit the greatness America is supposed to represent, we all must endure some fear in order to do what’s right. Not surrendering to our lesser nature, not letting xenophobia overtake us, is worth the danger, even if that’s much easier said than done.

Previous Did Pope Francis say Lutherans can take Communion at Catholic Mass?
Next When the Lights Go Out