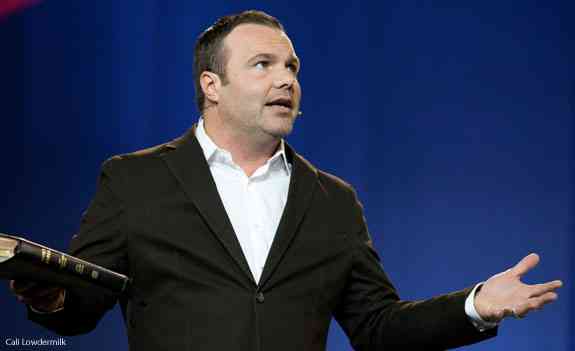 Mark Driscoll speaks: ‘There are lots of things I could say …’

Mark Driscoll is back. Sort of.

Days after stepping down as head of Seattle’s Mars Hill megachurch, Driscoll spoke briefly Monday (Oct. 2) at the Gateway Conference in suburban Dallas/Fort Worth, Texas. Initially, he and conference organizers agreed that he would not give a formal address at the conference.

But Robert Morris, pastor of Gateway Church in Dallas, said Driscoll requested to come to the conference as an attendee. “That was big of him to just come and be ministered to,” Morris said.

“We could crucify him, but since someone’s already been crucified for him…” Morris said, his voice trailing off. “It’s very sad that in the church, we’re the only army that shoots at our wounded. And I’d like you to stop it.”

Driscoll’s resignation came in the wake of accusations of plagiarism, bullying and an oversized ego that alienated some of his most devoted followers. Conference attendees gave Driscoll a standing ovation as Morris handed him the microphone.

“What do you want me to do?” Driscoll asked, teasing about the dangers of giving “a microphone to a preacher who’s been gone for a while.”

Driscoll spoke for three minutes, telling the crowd that he’s praying for Jesus to show him “blind spots” where he could grow.

Driscoll asked the crowd for prayer for his family of five children, ages 8 to 17. “I’ve cried a lot lately,” he said. “It’s been a rough season for the family.”

Driscoll said his family has moved three times, people have been arrested at his home and that he has received death threats. Recently, he said, he found rusty nails on his driveway.

When his children wanted to camp in the backyard, the family “woke up in the morning about 6:30 or so, and huge rocks about the size of baseballs come flying at my kids,” he said.

Days later, Driscoll said media flew over his house in a helicopter. He said his 8-year-old son came down wearing a military jacket, loading up his Airsoft rifle, asking if his jacket was bullet proof. “He didn’t have any concept of media coverage,” Driscoll said. “He thought it was bad guys coming to kill his family.”

Addressing a conference of pastors and church staff, he said, “Every pastor needs a pastor. You pastors, your family needs you to be your pastor.”

Morris said that Driscoll had been preaching 50 times a year, sometimes six times a week, which was not healthy. “I’m glad he’s saying, ‘Help me learn to do it differently and do it better.’”

Morris joked about how he invited both Driscoll and North Carolina megachurch pastor Steven Furtick to the conference, both of whom “got bad media this year.” Furtick, who was already under fire for buying a $1.6 million house, came under the spotlight for “spontaneous baptisms” that turned out to be not nearly so spontaneous. Driscoll and Furtick smiled and shook hands.

Previous Ask A Jew: Do modern Jews still follow the practice of circumcision?
Next Father Knows Best: How do you create strong bonds in relationships?