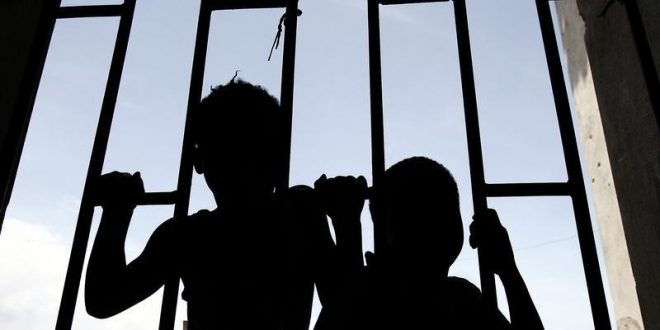 Children look through a window at the provisional U.N. base in the neighborhood of Cite-Soleil in Port-au-Prince, Haiti, May 17, 2006. REUTERS/Eduardo Munoz - RTR1DRTX

LONDON (Thomson Reuters Foundation) – Four in five children living in Haiti’s orphanages have at least one living parent and are sold or given to the homes on false promises of an education or medical care, according to a charity founded by British author J.K. Rowling.

London-based charity Lumos said many orphanages in the poor Caribbean nation were run by enterprising traffickers who starved and beat children to attract sympathy and money from well-intentioned donors.

“They do not imagine that so many orphanages are actually trafficking, beating, sexually abusing and starving children.”

After the 2010 Haiti earthquake that killed more than 300,000 people, she said many parents were being tricked or coerced into giving their children to orphanages.

“‘Entrepreneurial’ people have seen that foreigners love giving money to orphanages and because of that, they just set them up and they pay child finders to recruit children,” Mulheir said.

Such child finders track down poor families and convince them to give up their children or offer to pay for pre-natal care of pregnant women and take their child as a form of repayment, she said.

There are about 32,000 children living across 760 orphanages in Haiti, but only 15 percent of the institutions are officially registered, Lumos said in a report.

It said children living Haiti’s orphanages are more likely to be trafficked or go missing due to the lack of official records.

“It’s been a really hidden crime against children and it’s happening in lots of developing nations,” said Mulheir, who launched the report at the European Parliament in Brussels.

Experts say cases of human trafficking after a disaster are common as survivors are driven to desperate measures after losing their homes, belongings and means of earning money.

“People need to recognise that this entrepreneurial approach to orphanages is actually trafficking. The people who do this need to be prosecuted so that fewer people will think that this is a good way of making money.”