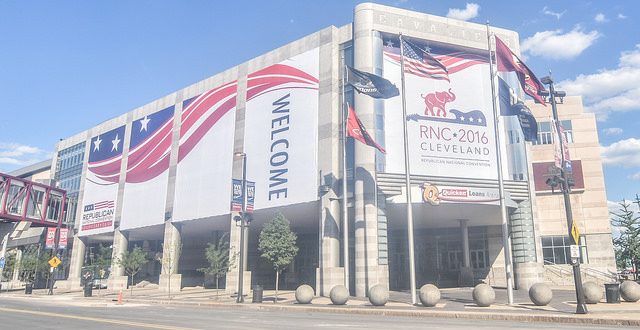 After watching Trump’s Republican convention entrance, all I could do was laugh and ask myself: “Can this political season get anymore like WWE?”

As a conservative leaning Libertarian, I was a fan of the Ron Paul Revolution. So I can sympathize with the derailment of the Bernie campaign, though Paul didn’t sell out after his run got a flat tire. I’ve been hoping for and working towards a legit libertarian presence on the American conservative political stage. I’m a big fan of Rand Paul and the growing third party or the libertarian leaning voice in the Republican Party.

My hope is that the Bernie and Trump phenomena will forever  disrupt the tired, two party candidate retread offered up every year.

The rise of outsiders who threaten the Democrat and Republican status quo is a monumental advancement for those of us who think both parties are too hard left and too hard right and have been multiplying a mess of mediocre moderates.

I’m more excited and interested in the repercussions of this election more than the actual election.

A woman, immigrant, successful business person and loves and believes in her husband.  Isn’t that the progressive holy grail? Isn’t that a legit feminist achievement. She’s done it all and now might be First Lady?

I could care less about similar lines of other speeches. Ever heard graduation speeches? Most of these political rallies and speeches are all the same: “I did, I can, I will!”

I’m watching the neo-progressives drive more and more former “Dump Trump” folks to change their mind, warm or switch to Trump. The more they rail, the they more bail. The anti-Trump rhetoric is turning voter drop outs into anti-Hilary voters. That might not be a full pro-Trump vote but it’s going to be a significant voter demographic impact.

The louder people demonize or vilify, the more annoyed reasonable and undeclared or undecided many voters like myself get.

In the end, whoever ends up as president, one thing is for sure: We will continue to be a disillusioned, divided and divisive country until we get more competent, compelling and courageous leaders.

Until then, we will continue to watch the chairs being thrown, the masks being torn off and the crowds provoked into a carnivorous frenzy by the media and campaigns. In light of all this, I’m looking forward to the next election after this one.

All of this doesn’t make America great…but it does make it entertaining.