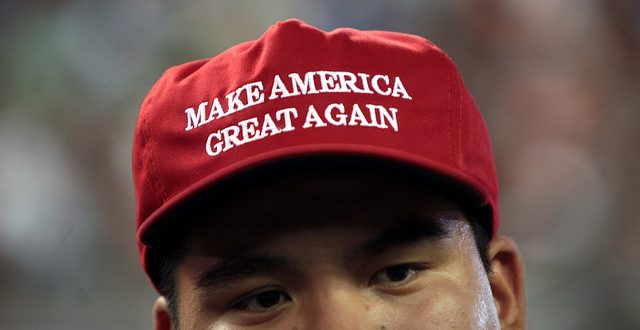 Make America Great Again hat in support of Donald Trump at a rally at Veterans Memorial Coliseum at the Arizona State Fairgrounds in Phoenix, Arizona. Flickr photo by Gage Skidmore

Navigating my roller bag down the narrow isle to find an empty seat on the full flight from Oakland to Spokane, I scanned my fellow travelers to assess who may be a favorable seatmate on the short two hour flight home. “Favorable seatmate” in my definition is someone who appears to have showered within the past 24 hours, does not have a child between the ages of 1-3 years old in tow, and is able to maintain all their body parts within the confines of their individual seat. Not a high bar, but can make a difference between a bearable flight and a miserable one.

A minute before identifying my seat of choice, I noticed a young (20 something) Caucasian male donning a camouflage baseball cap that read, “Make America Great Again.” Over the past six months this phrase seems to have taken on a life of its own, becoming political rhetoric and fueling a desire to return to days long gone where life was better. But it got me thinking. I want to unpack and dig a bit deeper, beyond the politically charged veneer to understand what does it really mean to “Make America Great Again”?

When you want answers — you Google.

So opening up my Mac Air and my search ensued.

While a number of articles popped in my browser, the one that The Atlantic ran in May this year, “Just When Was America Great?” intrigued me the most. Apparently some writer (certainly more published than myself) had a similar question. However, Andrew McGill had already conveniently completed much research on the subject. McGill found a recent New York Times article, “When Was America Greatest?” citing a Morning Consult poll of 2,000 people, that individuals equated America being great more often with their personal coming of age decade, (their mid 20’s). While the poll was clearly not statistically valid it drew parallels worth noting. It seemed that instead of viewing history through an antiseptic, logical lens, respondents were subjective in their assessment in recalling a time when America was great. Each generation held a nostalgic belief that America was great when… (fill in the blank).

But only being based on 2,000 respondents this poll means nothing. No need to trouble ourselves with the findings. Or does it?

For the sake of discussion, let’s ruminate on these potentially inconsequential findings a bit further.

The United States is a melting pot of differing races, cultures, education levels, religions, socio-economic status, and now gender-identification categories. Do you think our varying classifications may impact our viewpoint on history in trying to pinpoint when America was great? While the post depression generation and baby boomers may look back on the 1950’s as the best, do you think the LGBT community or African American’s do? And what are the characteristics that define “great”?

According to the articles I found, “great” ran the gamut, referring to decades when there were no wars, “the economy was booming,” “life was simpler,” society embraced “strong family values” to “improving social justice” and the advancement of technology.

Was life in the past really simpler or does it just seem that way?

Does the past era of “strong family values” take into consideration the thousands of unreported cases of sexual abuse that were conveniently swept under the rug?

Has increased access and availability of smart phones connected us in meaningful ways?

What if instead of looking back to days gone by that might not have been as rosy or great for all Americans, why not remove the rose-colored glasses and look to the future? We are a young country by most comparisons. Perhaps as a country we may not have already “peaked.” As a nation of immigrants we have many challenges to be sure, but instead of white-washing the rainbow of our pluralistic society, striving for a past utopia that never really existed, what if we learn to embrace and lean into the waves of change? What if we couple the optimism of our youth with the grace and wisdom of our coming maturity?

As a woman, I can say my 20’s weren’t the best. I may have had my youth and optimism, but I lacked wisdom and reflection. I was certainly brash and less graceful. My views on life at that age were more black and white, good and bad, us vs. them. Maturity brings forth reflections of gray in more than just the mirror. As a person, as an American and as a country, individually and collectively we can no longer afford to continue acting as if we are still in our 20’s. It’s time to grow and be responsible to ourselves as well as our neighbors next door as well as across the ocean. Perhaps in making America great, we simply need to drop the “again” and look forward, not back.