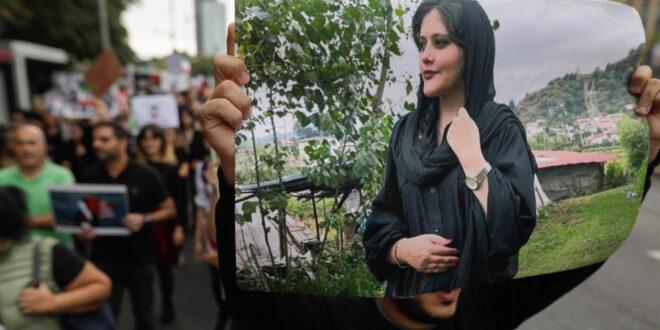 Bucharest, Romania - October 1, 2022: Details of people protesting against the death of the Iranian Masha Amini and for women's fundamental rights in Iran, outside the Iranian embassy in Bucharest / Photo by Mircea Moira (Depositphotos)

‘I felt violated by the demand to undress’: three Muslim women on France’s hostility to the hijab – The Guardian News

Afghan women deplore Taliban’s new order to cover faces in public. In their latest decree, the Taliban say it is ‘required for all respectable Afghan women to wear a hijab’. – Al-Jazeera

Muslim women in hijab get the brunt of discrimination. I asked them what that’s like. – The Washington Post

Switzerland is one of the five countries where face coverings are banned. France banned the wearing of a full-face veil in public in 2011, while Denmark, Austria, the Netherlands and Bulgaria have full or partial bans on face coverings in public. – Al-Jazeera

These headlines show how the hijab and the veil are being viewed in different parts of the world from Iran to America. All media platforms including social media are full of stories on the topic. They discuss how a Muslim woman should choose to cover or un-cover under the various banners of religion, morality, security, secular freedom, empowerment and human rights.

So, where does a Muslim woman stand today? What does she want? Does she want to cover or not cover? Or how does the society she lives in, whether in the east or west, her own family, her faith and her culture want her to look, dress, speak, walk or talk?

As humans, we are all born with a moral compass. According to the Oxford Dictionary, moral compass is used in reference to a person’s ability to judge what is “right and wrong and to behave in an appropriate way.”

From this definition of moral compass, society has created social and ethical norms. Then why are the “morality police” or a government’s “secular acts” always worrying about how to save a Muslim woman?

What is this coerced religion and enforced secularism trying to achieve, and why is a Muslim woman is used as a prop?

Some women in Iran or Afghanistan want freedom to dress and educate themselves, and there are some women who want the same freedom in the secular west of France or America to cover themselves.

There has never been a balance when it comes to women especially on this subject. This and thoughts like these came to my naïve mind when I heard the news on Mahsa Amini, the Iranian girl who was arrested, detained and then died after being beaten by the morality police for violating Iran’s dress code law. Amini was a young girl of Kurdish ethnicity who was merely visiting Tehran.

Why Amini was treated in such a brutal way? Was it to enforce a dress code or was it to teach her a lesson, set an example and prove a point? What was it? Or just because woman is an easy target or does religion demand or enforce compulsion?

If it is to point a finger at Islam or Islamic countries, then the Islam I grew up with, taught and learned is not the Islam of coercion.

Amini is another example that it is not about what the Muslim women want for themselves. It is for the benefit of political, regional and religious agendas while they talk about oppression, secularism, freedom, religious mandates, etc.

It is ironic that under the rule of Mohammad Reza Shah Pahlavi, famously known as Shah of Iran from 1925-1941, Iranian dress code was reformed for both men and women. In 1927, he introduced the Pahlavi hat, and then, in 1928, he passed a law that all Iranian men should wear western style clothing.

Later, through his wife, he popularized no veils in public for women. In 1936, the veil was officially banned in public under the decree of “Kashf-e hijab,” which means “unveiling.”

Elahe Saeidi and Amanda Thompson, with the University of Alabama, wrote this about Iranian reaction to Pahlavi’s dress reforms, “The official banning of veil occurred in 1936, which turned out to be the most disfavored reform of all. The state encouraged tailors and hatters to provide the new Western dress for women and even set aside money to aide women who could not afford it. Salaries of women employees could be suspended if they did not obey the law and medical treatment could be withheld (Bahmani 2012).”

Now compare this to the 1979 Islamic revolution of Iran that passed compulsory veiling laws, which then reverted Shah’s modernization.

Why is it that even in the 21st century, both east and west, are still arguing about the dress code of Muslim women under the cloak of secular values and religious mandates?

Are women freer in France than in Iran? Do women feel safer wearing a hijab in Iran than wearing one in America?

To me, the Iranian morality police, known as Ghast-e-Ershad exists both in the east and the west. Instead of finding a balance, we are on two opposite extremes. This is very evident in today’s global politics.

We are constantly trying to work toward political, religious and secular agendas. If one side is pleased, then the other side is not. We lack compassion, understanding and mutual respect.

We need freedom, balance and moderation, not morality police. We also do not need secular saviors. Instead, we only need to rely on our own moral compasses.

I am not an Iranian woman, but a Pakistani American Muslim woman. Iranian women and many other Muslim women are battling with coerced values, societal stigmas, bigotry and oppression on daily basis. However, there are other women who are not battling these ideas because they are allowed to follow their own choice and freewill.

In the end, all I will say is that if matters of religious and individual freedoms are allowed to be used as tools both in eastern and western societies to either empower or manipulate people, issues like dress code mandates will continue to rise at the cost of freedom and innocent lives.