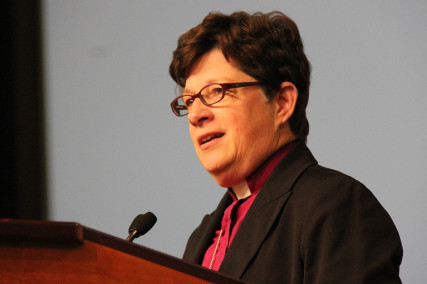 Eaton, the current ELCA bishop of Cleveland, is married to the Rev. Conrad Selnick, an Episcopal priest. Like Hanson, she is considered a moderate who supported the denomination’s decision to allow partnered gay clergy while allowing room for churches to disagree, according to the Pittsburgh Post-Gazette.

A native of Cleveland, she received a master of divinity degree from Harvard Divinity School.

“We are a church that is overwhelmingly European in a culture that is increasingly pluralistic,” Eaton told the ELCA Churchwide Assembly in Pittsburgh shortly after the election.

“We need to welcome the gifts of those who come from different places, that is a conversation we need to have as a church.”

The ELCA, which has lost members nearly every year since its founding in 1987, experienced a dramatic drop when it lost nearly half a million members in 2010 and 2011.

Hanson is credited with leading the nation’s largest Lutheran body — with more than 4 million members in 9,638 congregations — with a steady hand during turbulent times as the ELCA wrestled with the gay policy that Hanson favored but was hesitant to push on the larger church.

Even so, under his watch the Chicago-based ELCA saw a small but significant schism as conservatives upset with the decision to allow gay clergy defected to a new rival denomination, the North American Lutheran Church.

The election was a surprise to many, as Hanson was expected to win an unprecedented third term after 12 years in office. Hanson was the third presiding bishop in the denomination’s history; three of four finalists for the position were women.

“When I stood before you 12 years ago, I told you this is not an election won, this is a call received. And now this call has been extended to Bishop Eaton,” Hanson said at the assembly. “This is a humble and a holy privilege to serve the gospel as the pastor of this whole church.”

In June, Lutherans in Los Angeles elected the ELCA’s first openly gay bishop, four years after the denomination voted to allow openly gay men and lesbians to serve as clergy.