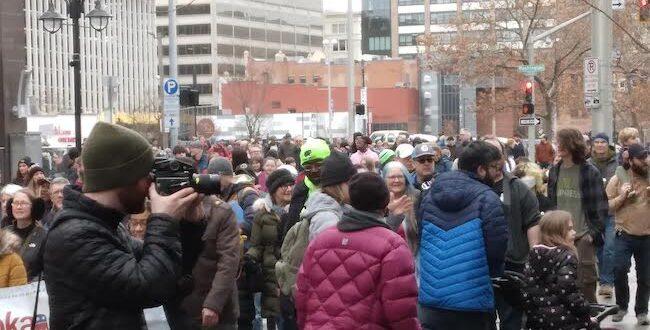 Over 1,500 attend the 2023 MLK parade in Spokane/Annemarie Frohnhoefer - SpokaneFāVS

People including Vernon Neal from Palm Springs, California, marched alongside long-time Spokane residents and visitors alike. Adell Whitehead, who performed a solo alongside the Spokane Community Choir to an enthusiastic crowd at Holy Temple Church of God in Christ the evening before, was also marching through downtown.

On Monday afternoon, Whitehead said she was “floored” by the number of people who showed up. After two years of virtual events, attendees hugged, talked and enjoyed one another’s company. However, it was not a social event. Speakers reminded those present at the march and rally that MLK. Day is not a single day of remembrance and community involvement. It is an ongoing struggle for justice, love and power. In 1963, King wrote, “human progress … comes through the tireless efforts and persistent work of men willing to be coworkers with God…”

Members of the Spokane Ministerial Association hosted a commemorative event and fundraiser for the Martin Luther King Center, a community center in the East Central neighborhood, on Jan. 15. Jarrell Haynes, the featured speaker and former Spokane Public School board president, spoke of the parable of the Good Samaritan.

Haynes leaned into the story, piecing together historical facts and infusing a perspective that King delivered in his sermon “On Being a Good Neighbor.” What many religious people know as the road to Jericho, was known in Jesus’ time as The Bloody Pass, he explained. The Levite who the Samaritan saved really had no chance. His journey placed him on a dangerous route and his outcome was nearly inevitable.

Mumbles of appreciation sounded throughout Holy Temple Church of Christ, while Haynes spoke of structures of power and the seeming inevitably of struggle. He asked the audience to close their eyes and imagine a society that is not bound by oppressive power structures or forced into inevitable outcomes due to structural racism. He envisions a power structure of justice with love as the foundation, he said.

He asked those present to imagine a Black family buying a house from a Black real estate agent; for those who struggle with mental and behavioral issues to see a Black therapist; for those looking for mortgages to find one with a Black bank. As the list continued, voices in the crowd made their appreciation known. Haynes ended his speech with the acknowledgement that there have been changes in Spokane and there will continue to be progress.

Though the Black professional community in Spokane seems to be thriving, Haynes acknowledged the playing field is not equal. There are disparities in the number of incarcerated Black people, the number of houseless Black people and the number of Black people below the poverty line. These disparities are evidence of the structures of power that continue to support a modern-day Bloody Pass, he said. But in this version of the story, the travelers are joining together, tearing down the obstacles and replacing the foundation with love and justice.

According to Haynes, “Justice is a power that counteracts all things that aren’t love.”

In 1963, from a cell in the Birmingham Jail, King wrote, “I came to Birmingham with the hope that the white religious leadership of this community would see the justice of our cause and with deep moral concern serve as the channel through which our just grievances could get to the power structure. I had hoped that each of you would understand. But again I have been disappointed.”

After 23 years working for the MLK Center, Executive Director Freda Gandy has seen great changes in the kind of support the organization receives from religious organizations in Spokane. Area churches have always supported the MLK Center by pooling their time, resources and talent. She recalls an event hosted by a religious group that provided oil changes to single mothers. She is appreciative whenever she is embraced by faith organizations and invited to attend services and speak about the MLK Center’s work. Over time she has seen a shift in how the Center is approached, and it is a shift she is grateful for.

Gandy explains by saying, “Don’t tell me what you think [the Center] needs. Ask me what the Center needs.”

Monday’s rally, resource fair, march and teach-in were all sponsored by and supported with the cooperation of 27 different organizations, including health and wellness organizations as well as non-faith based social justice groups.

Alethea Dumas, equity and community engagement program manager for Better Health Together and member of Calvary Baptist Church, explained that the Black church has always been a safe place. In her grandmother’s era, the church was a community center that provided services for those in need and offered faith-based companionship within the Black community.

Dumas pointed out that King was a minister, a man of faith, but that his organizations were comprised of people from all walks of life. She doesn’t romanticize the church and says that she has been in the church, has left the church and has returned. As a queer woman, she found that the church and organized religion can be judgmental. She believes that judgment is based on fear. In Dumas’ point of view, love can undo fear. When fear is undone, then love grows and justice and equity grow with it.

“Fear gets in the way of us coming together as humans [and] injustice keeps happening,” she said.

Like Haynes, Dumas sees the connection between love and justice. In her experience, fear is the element that undoes unconditional love.

“We’re all called to love,” she said. “Equity is about learning to love one another better.”

Dumas, Gandy, Haynes and others are seeing this learning in the next generation. The MLK Center was selling t-shirts to fund a scholarship program for youth. The tables at the convention center were staffed by intergenerational groups.

Dumas, accompanied by her young cousin, couldn’t help but say, “I am proud of the younger generation. They are finding their power and voice.”

Previous They Said I Was ‘Demon Possessed,’ But I Was a Victim of Spiritual Abuse
Next Dreams of Newsrooms Now Gone