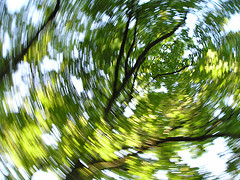 Last week, my world went spinning out of control. I went home from work with vertigo and ended up in the emergency room. An MRI later ruled out a tumor, they sent me home with drugs and instructions to come back in a couple of days if not improved. I could hardly walk. I could not read and or write. I could not work. I could listen to the radio. The medicine did not work. I spent time in bed. My family cared for me in love. But I remained in a extreme dizziness.

Until my wife did research and found that there were different maneuvers that we could do together to control the spinning. Love finds answers when other do not. We did some of them. The helped a little and by Sunday. I went to church dizzy, but not as dizzy as I had been.

I would not miss church, plus Jesus already had experiences with dizzy people. Going home, I started to feel the world steady a little more. I could read and I open my Bible to the farewell discourse in John 13-17. I have been reading this before the went spinning out of control.

Again, I felt I was becoming less steady. We called urgent care and got the same diagnosis that some crystals got into the wrong cannel in my ear and that a physical therapist could do some positioning maneuvers to get them back. I did research and found another maneuver to dislodge the crystals in my ear from a doctor in Colorado. The crystals made me useless to work, to others, but not to God.

Monday, I woke to find I was still dizzy. I called my doctor to see if I could get a referral to a physical therapist. I did not hear from him, but continued to hear from God. I continued to do the maneuvers and return to work still shaky. I return to usefulness to others and work. God remained. I have yet to hear from my doctor, but I heard from my God and that has made all the difference.  That, and the love of my family.