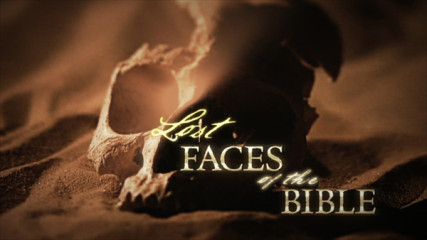 JERUSALEM (RNS) Many artistic renderings of biblical figures hang in churches and museums, but no one really knows what they and their contemporaries looked like.

Now, an international team of archeologists, forensic anthropologists and facial reconstruction experts has tried to answer this question by recreating the faces of three adults and a newborn whose skeletal remains date back to biblical times.

The series, created by Simcha Jacobovici, a controversial Canadian-Israeli filmmaker and amateur archaeologist, suggests who these four anonymous people might have been. Along the way, it illustrates what life in the Holy Land was like thousands of years ago.

Dramatizations woven into the investigation bolster the narrative. The series is hosted by David Berman who stars in “CSI: Crime Scene Investigation.”

Printed 3D Skull from the “Delilah Revealed” episode of “Lost Faces of the Bible.” Photo courtesy of AP Faces Ltd.

The first episode, “Delilah Revealed,” focuses on a Philistine woman who, the producers say, “lived at the time of the biblical Delilah,” the temptress who betrayed Samson.

The second, “Ancient Warrior,” asks whether a man buried in a desert cave with a walking stick, a pair of sandals and a broken bow lived “the same challenging life of a desert nomad like Esau,” the twin son of the biblical patriarch Isaac.

The third episode, “The Man Who Saw Jesus,” attempts to recreate the life of a man from pre-Canaanite times whose bones were interred using a special funerary practice common in Jerusalem from 20 B.C. to A.D. 70.  The bones were found in a burial cave in a region of Galilee strongly associated with the ministry of Jesus. The show’s promotional material states “if Jesus was a well-known miracle worker and/or healer,” this unknown man “surely knew him.”

The final episode, “Sacrificial Child,” explores whether a baby whose remains were discovered in a Canaanite jar under a house was sacrificed by her parents, a common practice in those times.

While forensic experts have already reconstructed the faces of people from several ancient civilizations, this is apparently the first time scientists have worked with Bible-era remains, Jacobovici said.

One reason: the difficulty of obtaining the ancient bones for examination due to religious sensitivities.

“Ultra-Orthodox Jews believe you shouldn’t move the bones of the deceased,” Jacobovici explained. To get around the problem, the show’s forensic experts scanned the remains but did not incorporate them into the reconstructions.

Though Jacobovici  has achieved success in the entertainment field — he’s won three Emmys, among other awards — his films, including “Nails of the Cross,” a 2011 film that suggested that nails discovered in an excavation were quite possibly the nails that pinned Jesus to the cross, were criticized by some of the archaeologists whose work he profiles.

In a statement at the time, the Israel Antiquities Authority said the “interpretation” put forward in “Nails of the Cross” “has no basis in archaeological findings or research.”

But the forensic experts who worked with Jacobovici on the “Lost Faces” series say his dramatic style of filmmaking actually helps educate the public about the Bible in a new way, and heightens an appreciation for the scientific processes utilized to recreate the four figures.

At a Jerusalem press briefing earlier this year where the four reconstructed heads/faces stood, somewhat eerily, on a table in the corner of the room, Victoria Lywood, a Montreal-based forensic artist, explained how she had printed three-dimensional skulls from CT scans using a rapid prototype printer designed for facial reconstructions. The rest, she said, was based on soft tissue depth measurements and other forensic methodology.

“The science in the series is sound,” said Lywood, who often assists in law enforcement identification cases.

Israel Hershkovitz, professor of anatomy at Tel Aviv University, said he decided to participate in the series as way to get the younger generation “excited about the history of the Holy Land.”

Hershkovitz said he has “no idea” whether the newborn found in the jar was sacrificed, “but it is a possibility” because it was a common practice during biblical times.

“Look at Abraham, who was about to sacrifice his first-born son, Isaac. Today we think, ‘What kind of God would demand such a thing?’ But back then, people sacrificed their first son to gain luck for their family and tribe.”

Judaism, he noted, “was embedded in local custom but also found ways to convince people to abandon that custom.”

Hershkovitz said most people think the story of Delilah is about sex and violence.

If the show’s Delilah segment succeeds in teaching the history of the Philistines and the Israelites, “it’s served its purpose,” Hershkovitz said.

Tags lost faces of the bible