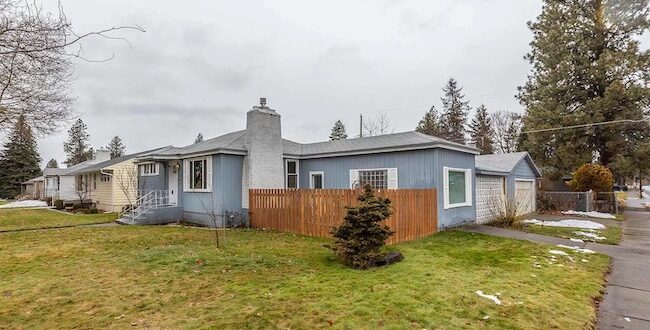 Tracy's house on the South Hill

Loss is part of change, but so is renewal

Loss is part of change, but so is renewal

Just a few days ago I sold my little blue house on Spokane’s South Hill.

For over a year, I haven’t lived there full-time and have been renting it out to some friends. Still, the sale was bittersweet.

I bought the house in 2013 at my grandma’s prompting.

“You need to invest in something,” she said. “Otherwise, all you have is a box of receipts.”

But that house was more than an investment.

It was the only address I’ve kept in my adult life for more than a year or two. It was where I laughed and learned and cried and felt safe.

It was my home.

I filled it with friends who celebrated birthdays there and gathered in the backyard for summer barbecues. Some even lived with me for a time when they needed a place to stay.

And, like most homes, its walls also saw a lot of tears, heard a lot of yelling and witnessed misjudgments.

I welcomed people in I shouldn’t have.

I started projects I never finished.

I had plans for that blue house. But circumstances changed, and it became clear that I also needed a change.

The lives of my closest friends began to flux. They got married, had babies (or grandbabies). Some got divorced. They moved out of my neighborhood.

My job teaching journalism at Gonzaga came to end about that same time.

At first I was sad things weren’t the same with my group of friends, and I was angry with Gonzaga for not renewing my contract.

I’m no stranger to change, but I was comfortable in this life I had made and wanted it to stay as it was. I wanted control.

Then I realized I had to make a choice. I could stay still, and disappointed, while life moved around me – or not.

It wasn’t about improving the blue house anymore, it was about improving myself. I needed to accept impermanence, as taught in Buddhism, if I wanted to find peace. And that meant allowing myself to grieve what I’d lost, even if it was the little things.

In Buddhism, impermanence is often associated with loss, but that doesn’t have to be a bad thing.

“Impermanence is not only loss; it is also change, and change can be refreshing and renewing. In fact, change is always both good and bad, because change, even when it is refreshing, always entails loss. Nothing new appears unless something old ceases,” wrote Norman Fischer in “The Lion’s Roar.”

Embracing change helped me say goodbye to my blue house and led me to the Palouse. Spokane is close enough that I can still run SpokaneFāVS.com and the FāVS Center, but now my mail comes to Pullman, where I have a great job at WSU and just bought a home.

And now I feel calm. I feel brave.

I thought change was trying to hurt me with its twists and turns, but it wasn’t trying to break me. It was trying to help me understand that change is an experience, a teacher.

It taught me a lot about making a home. I have a list of projects I’d like to start – and finish – here. More importantly, though, I hope with some intentionality that what comes through this front door is laughter, and that love and joy and purpose and follow through.

And when change comes again, which it surely will, maybe I’ll be ready to welcome it as my guest.

Tracy Simmons, a longtime religion reporter, is a Washington State University lecturer and the editor of SpokaneFāVS, a website dedicated to covering faith, ethics and values in the Spokane region.

Previous God Said It. Science Confirmed It. We’re All Family.
Next Defying the New Nazis