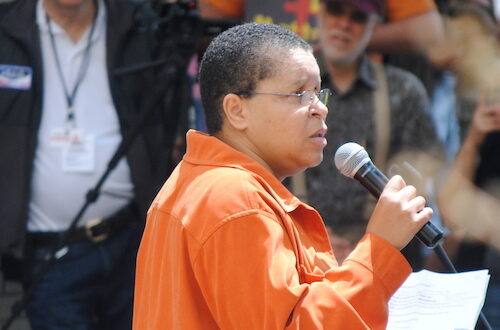 Civil rights activist and journalism entrepreneur Sandy Williams died Sept. 5 on a plane that crashed into the Puget Sound.

Williams was one of the 10 passengers on board the seaplane that went down near Mutiny Bay west of Whidbey Island after 3 p.m. She was on her way back to Spokane after vacationing with her partner, Patricia Hicks, according to the Spokesman-Review.

“Besides her work leading the Black Lens and the Carl Maxey Center, Williams was active in many other civil rights issues,” wrote Spokesman journalist Jonathan Brunt. “She was a former member of the Washington State Commission on African American Affairs and a former interim executive director at the Odyssey Youth Center, which serves LGBTQ youths. She also helped establish a Pride Center at Eastern Washington University.”

Williams founded the Black Lens in January 2015 as a way to focus on news and commentary important to the African American Community. Published every month since its inception, her publication was on hiatus from February 2022 through January 2023.

“This is a tragic loss for Spokane. Sandy will be remembered for the work she did for the Black and queer communities,” said Tracy Simmons, executive director of SpokaneFāVS. “As a fellow media entrepreneur who is also part of the LGBTQ community, I can only hope to one day make such difference as she did.”

Mary Stamp, editor and publisher of The Fig Tree, shared her condolences on The Fig Tree Facebook page.

“With great sorrow I share with you that the community has lost Sandy Williams, a colleague editing the Black Lens and the director of the Carl Maxey Center. She has been a great civil rights activist, persisting in founding both entities to give voice and a gathering place for the African-American community,” wrote Stamp. “She has been a friend with whom I consulted frequently as I worked on The Fig Tree. Her death is a great loss to the whole community. Surround her family with love and prayers.”

She was celebrating her 61st birthday.

Previous Not “Woke” Enough
Next Freewill: God predestines us and gives us freewill