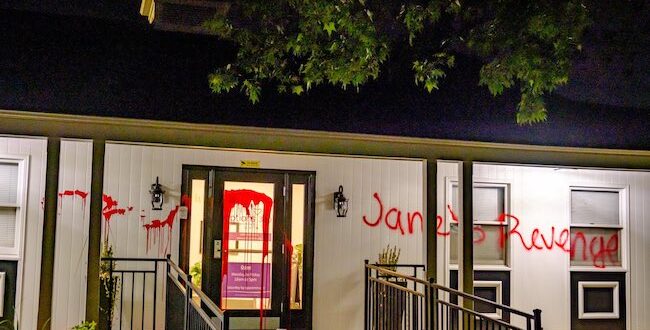 Options360, an evangelical pregnancy crisis center in Vancouver was hit with some red paint in June and had “Jane’s Revenge” written on the front of the building/Twitter photo from @alissaazar

Since the leaked opinion of the overturning of Roe v. Wade on May 2, several national crisis pregnancy centers and other anti-abortion entities have been subject to criminal assaults.

Across the nation, these attacks have ranged from vandalism to windows smashed, from Molotov cocktails thrown into facilities and causing fires to graffiti reading “Jane’s Revenge” and “If abortions aren’t safe then you aren’t either.”

In response to those attacks and the final decision of the Supreme Court to overturn Roe v. Wade through the Dobbs decision on June 24, local anti-abortion agencies within the Spokane region have increased their security.

“Over the past weeks, pregnancy resource centers throughout the state and the nation have faced attacks by pro-abortion activists,” Life Services of Spokane and MyChoice Clinics Executive Director Glendie Loranger released in an email statement on June 14 to supporters.

“Due to these threats and other suspicious activity around the center, Life Services has increased security measures to protect our clients, staff and residents,” Loranger said. “We are also coordinating with local law enforcement to ensure an immediate response to any attacks on our clinic or staff.”

According to an interview with Loranger on June 21, they had yet to experience a criminal attack but have had “a lot of suspicious activity” going on. SpokaneFāVS left a message with Life Services on July 5 asking if this information was still current, and they did not respond by publishing time.

Corporal Nick Briggs, Spokane Police Department’s public information officer, was unable to give any details on any of the incidents they are handling, but he did say they were communicating with a variety of organizations in the community who have expressed concerns for the safety of their facilities and personnel.

“SPD evaluates each of these instances on a case-by-case basis to determine if a criminal law violation has occurred, and what, if any, measures can be implemented to allay the concerns,” Briggs said in an email. “We understand that the recent decision has evoked passionate responses from individuals with a variety of perspectives. We want to help ensure that passion does not manifest itself in violence or other criminal conduct.”

The Washington Stand, which describes itself as a “news and commentary outlet” and is published by the national anti-abortion Family Research Council, has been tracking attacks on churches, anti-abortion organizations, property and people since the Dobbs leak.

In an article dated June 10, they had found 41 reported instances across the nation. As of July 1, they have tracked 92 instances. The closest cities to Spokane where these attacks have occurred include Olympia, Renton, Bellevue and Federal Way.

Sheri Olsen, executive director of Path of Life, has also been tracking these instances.

“What I found interesting is that many of the attacks are taking places in those states who are most protective of abortion, are very protective (of abortion) or have some restrictions as well as protections (for abortion),” Olsen said. “I also found it interesting that there have been attacks in Washington State, and that is something that surprises me that has not been locally reported.”

On June 30, Olsen attended a webinar put on by the U.S. Attorney’s Offices for Western and Eastern Washington, the Department of Justice’s Civil Rights Division and the FBI. The reasons for this webinar — according to an invite letter from Washington United States Attorneys, Nicholas Brown and Vanessa Waldref, to reproductive health care provider in the state — were due to this “anxious time in our country” and the possibility that “rulings from the U.S. Supreme Court might prompt community reaction.”

“The purpose of the webinar was to provide some background about the Freedom of Access to Clinic Entrances (‘FACE’ Act), respond to questions from reproductive care providers regarding the statute and educate them about what to do if they experience threats, vandalism or violence,” according to a statement made by the U.S. Attorney’s Office for the Eastern District of Washington. “The FACE Act, which was enacted by Congress in the 1990s, protects people from physical intimidation, threats and violence as they seek or provide reproductive healthcare.”

“We have hired nighttime security, which we’ve never had before,” said Olsen.