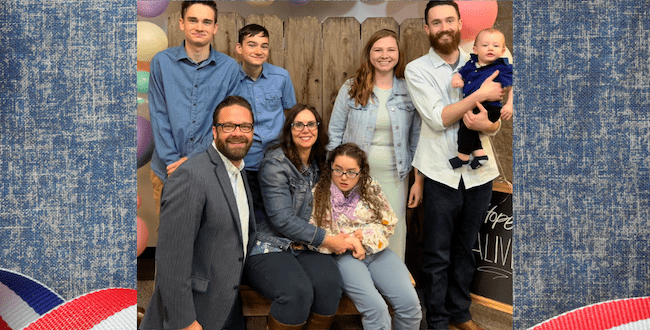 Paul Brian Noble with his family/Contributed

Paul Brian Noble wrote in his candidate statement for Spokane County Commissioner in District 4 that he’s “an everyday guy that loves my family” and the “people of Spokane County.”

Currently, he is a peacemaker fellow with and CEO of Peacemakers Ministries and executive pastor of Valley Assembly. These roles, in addition to being a sheriff’s and fire chaplain in the past, demonstrate that he knows how to navigate conflict, something he’s been doing for 25 years, Noble said.

And in this time of increased partisanship, he sees that as one of his best qualifications for the role.

“I think we’ve stopped listening to each other and started demonizing each other instead of sitting down saying, ‘What’s really important to you?’” said Noble, adding, “You don’t have the right to break relationship, name call and put down someone to get what you want. What you need to do is listen to each other.”

He is running against Mary Kuney, who currently represents District 2. Both are running on a Republican ticket. Due to the redistricting changes made last year, two more commissioner seats were added with Kuney now running for District 4.

Noble thinks the increase to five commissioners from three is a “good thing” because “we’re going to have better representation.”

Robin Walter, owner of Medicare Maze Made Easy and member of Valley Assembly, describes herself as “just a great grandma that wants our country saved and our county in better hands.”

She said she believes Noble’s ability to keep peace more than qualifies him to the role of county commissioner.

She’s seen him in action when two individuals began to get heated at one of the two candidate forums Noble hosted at Valley Assembly for all local candidates. He physically came between the individuals and deescalated the situation using his peacemaker training.

“I’ve just watched him do this, and so I know his capabilities, especially if he becomes the commissioner, that he’s going to be the peacemaker,” said Walter.

However, she can’t vote for Noble, as she is located two blocks from the District 4 line, but she has given $1,000 to his campaign.

“He’s an America first kind of guy, and he’s fair,” said Walter. “He is so down to earth and always biblical and so right about he preaches.”

Walter said every time he preaches at Valley Assembly, she makes sure she’s there.

“There needs to be more Brian Nobles in the world,” said Walter.

Why Noble began to think about running for political office

He first began thinking about running for a political office when his oldest son got engaged about four years ago and asked a group of people, including his wife, Tanya, to begin praying for him about this idea.

As a pastor, he spoke on moral issues of the culture “very frequently” at his church, so he’s always had a “slant” toward political office, he said.

“[I] started thinking about, ‘Oh, I’m going to be a grandpa someday. What kind of society are we going to have?’” said Noble. “I was just challenged in my heart, you got to move beyond complaining about it to doing something about it.”

The “it” at that time largely revolved around the Spokane County’s commissioners’ response to COVID-19 and all the restrictions to individuals, small businesses and churches.

An advocate for separation of powers, something he identifies as a “biblical principle,” Noble said he could not believe the government — federal, state and local — used executive orders to shut down churches, violating First Amendment rights, and allowed businesses to suffer financially.

“Someone has to be a voice for the people to say, enough is enough,” said Noble. “There could have been 100 more responses besides the one-size-fits-all approach.”

Thoughts about his rival, Mary Kuney

Watching the county commissioner meetings, Noble was struck by how Kuney handled the county’s COVID-19 restrictions.

For example, according to Noble, while she was in a health board meeting, she suggested a possible app “that rates small businesses, that could be punitive” if small businesses were not complying with the mandates.

He said none of the other board members at that time said anything about that in response, which he thought was a disservice to her.

“Because we can all have bad ideas so they could have been gracious, like, “’Hey could have been just brainstorming a bad idea,’” said Noble. “I would not be for having the public rate a small business on a government mandate in a punitive and a shaming thing, that’s just fully contrary to what I believe [about] free markets, limited government.”

To be fair, Noble says he does not know how serious of an idea this was for Kuney, but he thought for the county, he would show a different leadership style.

Former local politician will be supporting Kuney not Noble this election

Diana Wilhite, who lives in District 4 and who was a former Spokane Valley City Council member for seven years and the Spokane Valley mayor for three years within that time, thinks Noble’s concerns have more to do with federal and state government than local.

“It’s not like [the commissioners] can just tell the governor to take a hike. They were caught between a rock and a hard place,” said Wilhite. “And although privately, they felt that this was not the best way to go about combatting all those concerns we had with health, legally, they had to follow the governor’s mandate.”

She also thought his master’s in missional leadership from Northwest University and his experiences as a mediator, “while a good quality to have,” was not really high on the list for what the county commissioner position needs, which was someone who knew how to manage budgets.

“I’m supporting Mary Kuney, who is the current county commissioner for this race. And the reason why I supported Mary to begin with was that she’s a CPA, she’s a numbers gal,” said Wilhite.

Kuney’s experience serving the State of Washington as a chief deputy auditor for Spokane County and knowing what their budgets are like also draws Wilhite’s vote.

“The thing is that commissioners, the budget is one of the biggest items that they have to do because every other county official — the auditor, the assessor, the clerk, the Treasurer — all have to ask for money to run their departments from the county,” said Wilhite. “So, budgeting and understanding budgets and learning how to handle finances is a big part of their job.”

Still, Noble thinks he will represent everyone in his district, no matter what they believe by not trying to get them to believe just like him, but because he will listen to their concerns.

“The Bible is very clear. Do not return evil, for evil or insult for insult, but give a blessing instead. And so that’s what we should do,” said Noble. “And allow that person to live whatever their conviction is before God, and I’ll live whatever conviction I have before God. And that’s what I’m hoping to return is just back to civility, where we can just talk about these things. And sometimes we will respectfully disagree.”