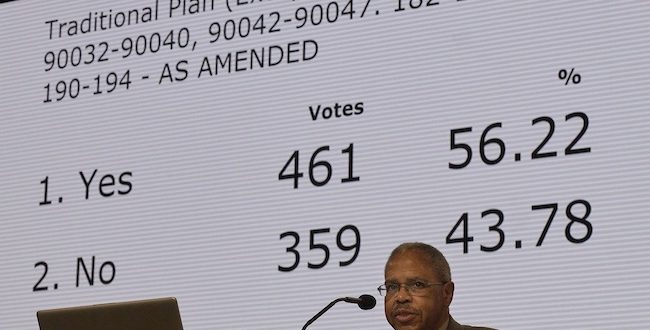 As the Rev. Joe Harris presides over the legislative committee, the results of a vote approving the Traditional Plan as amended by 461-359 are displayed. February 26 was the final day of the special session of the 2019 General Conference of The United Methodist Church in St. Louis. Photo by Paul Jeffrey, UMNS.

Local Methodist leaders are expressing both heartbreak and hope after the church voted Tuesday to maintain a ban on LGBTQ clergy and same-sex marriage.

Bishop Elaine Stanovsky, of The Greater Northwest Area of the United Methodist Church, called the decision ‘discouraging’ in a blog post, but said that last night 200 people spontaneously gathered at the conclusion of the General Conference in St. Louis to worship and pray.

“The gathering became a reminder and a foretaste of the One Church we strive to become. God bless the grass that grows through the cracks…,” she wrote.

The One Church plan, which failed at the Conference, asserts that Christians can disagree about LGBT and gender issues and can still have different practices and work together within one church.

Though some are considering leaving the Methodist church, others are planning to stay and fight for LGBT rights, according to The Atlantic.

The Rev. Geoff Helton of Audubon Park UMC said in an email to his congregation that he’s unsure what the results of the Traditional Plan might mean for his church, but is optimistic it won’t have a negative effect.

“Our church has traditionalists, moderates and progressives and we’ve been living together and doing powerful ministry together for a long time. I don’t see that changing – we’re too close as a church family and have done too much good work together,” he wrote. “Mostly, we’ll just keep doing what we’ve been doing, feeding hungry people, knitting chemo caps, volunteering in the schools, worshiping and growing together. We’ll continue to laugh and love and cry with one another.”

Inland Missional District Superintendent Rev. Gregg Sealey said in a phone interview that, like at Audubon, there’s much theological diversity among Methodists in Eastern Washington and North Idaho.

“Yet they love each other and serve alongside each other and don’t want to be siblings in a different church,” he said, adding that the Western Jurisdiction has long been a leader in finding common ground when it comes to LGBT issues. He hopes this area can find a way to extend that safety to other Methodist communities.

The dust still needs to settle after yesterday’s decision, and much remains to be determined, Sealey explained.

According to the Religion News Service, The United Methodists’ top court has ruled that parts of the Traditional Plan were unconstitutional, requiring delegates to amend them. Sealey calls it the “Traditionalist Plan” rather than “Traditional Plan” because, he says, “It’s not our tradition as a Methodist.”

The Judicial Council will review the Traditional Plan at its next scheduled meeting in April. Any piece of legislation declared unconstitutional at that meeting will not be included in the Book of Discipline. All other changes will take effect Jan. 1.

“It’s hard to see the church I was born into and love take this kind of a turn,” he said, adding, however, that the conversations and community he found while attending the conference gave him hope for the future of the church.

The struggle, he said, is bringing that inspiration to those who didn’t attend the General Conference and therefore didn’t feel the unity that he and Stanovsky shared with others.

“How do we get the message back that there is hope and also reconcile the tremendous harm that’s been done? We can’t undo and unsay a lot of what’s been said and done,” he said. “I think there is desire for being church in new way, not necessarily leaving the denomination.”

Previous Ask A Buddhist: Who, What is Buddha?
Next UMC’s “Traditional Plan” not Biblically Responsible