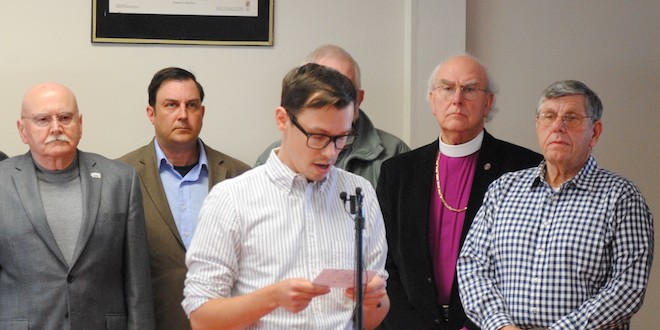 Local leaders speak out against vandalism at Sikh Temple of Spokane

Drunk and cold, Jeffrey C. Pittman, 44, allegedly broke into the Sikh Temple of Spokane early Thursday morning, possibly looking for a place to get warm.

When he took in his surroundings — Punjabi text and illustrations of men with beards and turbans — he thought he had entered a place that was associated with the Taliban, or ISIS, he told police, and began damaging things inside the building. In America Sikhs are commonly mistaken for Muslims, the Atlantic reported in 2015.

Pittman allegedly sprayed a fire extinguisher throughout the building, flooding the sacred space with fine, yellow powder. He ripped the pages out of the Sikh sacred text — the Guru Granth Sahib. He poured out the gurdwara’s sacred water imported from India.

Early Thursday morning, when some Sikhs came in the building for prayer, they found the suspect, hiding naked, and detained him, according to a statement from the Spokane Valley Police Department.

Pittman was arrested on burglary and malicious harassment charges.

On Thursday afternoon faith and political leaders gathered in the temple’s langar to condemn the vandalism at a press conference organized by the Spokane Interfaith Council.

“We are your classmates, neighbors and colleagues and we would like to take this negative act of vandalism and turn it into an opportunity for the community to learn more about each other,” said Subarna Nagra, member of the Sikh Temple.

She said the temple (also called a gurdwara) would soon be holding an open house for the Spokane community to learn more about the Sikh faith.

Spokane County Sheriff Ozzie Knezovich said there are too many acts like the one on the Sikh Temple happening throughout the area. Last year the Bosnia and Herzegovina Heritage Association of Spokane, a Muslim prayer space, was vandalized and in 2014 Temple Beth Shalom was also vandalized. Over the weekend two Spokane Valley churches were set fire.

“I think it’s time that we as a community bond together so that these acts no longer occur,” Knezovich said. “Fear, anger and hate are what is happening to our society. No longer is it love one another, respect one another and be kind to one another. These kind of acts are not who we are as an American society.”

He said acts like this would not be tolerated in the Spokane area.

Bishop Jim Waggoner of the Episcopal Diocese of Spokane said the vandalism at the gurdwara is saddening, but also an opportunity.

“I think it’s an opportunity to encourage everyone to get to know your neighbor and get to learn and respect other religions’ traditions, practices and beliefs,” he said. “…Sometimes what we don’t know does cause fear.”

Admir Rasic, a local Muslim, came to the press conference to stand in solidarity with the local Sikh community. He said when bigotry and hate speech go unchallenged, vandalism like today’s is the consequence.