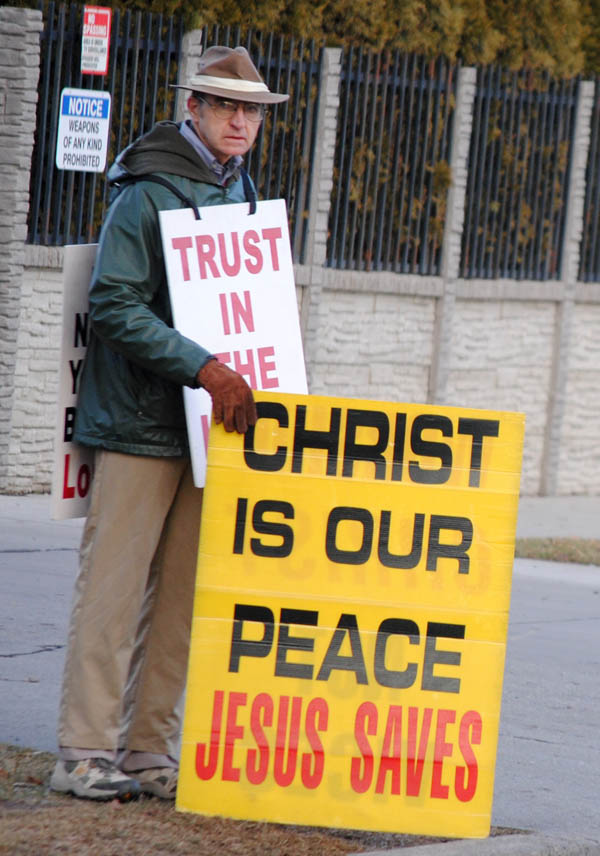 A man stands outside of Planned Parenthood in demonstration/Tracy Simmons

People proselytize in a variety of ways. Some do it raucously, like Harold Camping and Kenneth Copeland did through radio and TV for decades. Others do it quietly, perhaps with wily bumper stickers.

Eddie, Bruce and Frank do it with bullhorns, outsized signs and with neon Scripture verses ironed onto their clothes.

“People might think this is unloving,” Eddie said, as he and his comrades stood in demonstration outside the Planned Parenthood of the Greater Washington and North Idaho building in Spokane on a recent Friday afternoon. “But the Bible says in Jude 1 that some people have compassion and are making a difference, others save with fear by pulling them from the fire.”

Eddie refused to give his full name. He said he’s been demonstrating at places like Planned Parenthood since 1999 and has become reluctant to talk to the media. The group notes that they aren’t protesting, but raising public awareness about the saving message of Jesus.

On New Year’s Eve they assembled downtown to spread the Gospel, and they said they regularly gather outside Catholic churches, Protestant churches, the Spokane Islamic Center, gay pride parades and large public events like the Bloomdsday Parade.

“We have no angle here but to warn people of what it says in John 3:36, that ‘he that believeth on the Son hath eternal life; but he that obeyeth not the Son shall not see life, but the wrath of God abideth on him’,” Eddie said.

Too many churches, Eddie and his colleagues say, preach only the good stuff in the Gospel — not the whole truth.

“The sugar-coated Gospel is not Gospel at all,” he said. “You have to preach the good and the severity of God. This is my pulpit. This is my church out here. Most people won’t go to church so we’re bringing to them.”

Some passersby yell at the group, others honk and give thumbs up. Eddie said if they help save one person, their demonstrations are worth it.

Anita Gehret, however, said their demonstration on Friday had the opposite effect. She said when she pulled into the Planned Parenthood parking lot (she was driving her friend there), the men waved their signs at her and yelled at her through the bullhorn.

“I don’t believe in using God as a tool to oppress other people, it’s not right,” she said. “They don’t know what good Planned Parenthood does for the community.”

Gehret blared her radio at them, as a way to protest back, she said.

What do you think, readers? Is this type of evangelism ethical and effective? What are your thoughts on proselytizing?

Previous Zimbabwe: A lesson
Next VIDEO: Blessing of the Spokane River