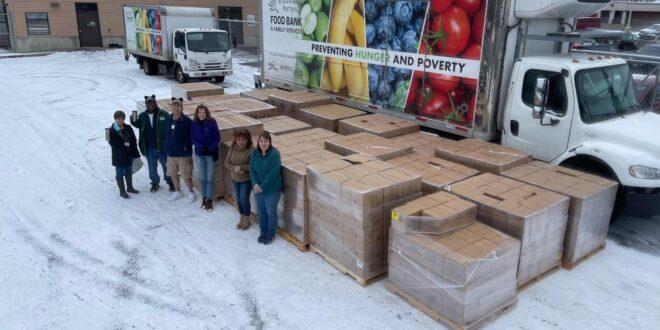 Spokane Valley Partners receive over 34,000 pounds of food delivery by The Church of Jesus Christ of Latter-day Saints / Contributed

Spokane Valley Partners Food Bank received over 34,000 pounds of food from the The Church of Jesus Christ of Latter-day Saints last week on Giving Tuesday.

“We have seen a tremendous increase in need,” said SVP Director of Development and Communications Angie Kelleher in a Nov. 30 press release. “Families lining up for the first time are not alone. We are serving over 90% more people through our hunger relief programs over last year and the warehouse shelves show it.”

In addition to the more than 34,000 pounds donated to SVP, the Church also sent about 34,000 pounds, split by two food banks north of Spokane. One was North County Food Pantry in Elk and the other was the GreenHouse Food Bank in Deer Park.

SVP has relied on Church missionaries assigned to the Spokane area to assist with food packing and sorting for many years. According to the SVP press release, “their contribution to the mission to prevent hunger and poverty is immeasurable.”

“The Church has always had a strong commitment to relieving the suffering of the poor and needy,” said Elder Hal C. Hunsaker in an email. He oversees the 13 stake presidents who lead over 50,000 members in the region.

The delivery came from Welfare Square in Salt Lake City, Utah (headquarters for the worldwide church), for the food bank to distribute.

This season’s “massive” food donation has helped shore up food bank inventory shortages and put food on the table for thousands of Spokane Valley households, according to the press release.

“Something many people don’t know is that we own our own farms and processing plants. Our food makes it all around the world to help those in need,” Hunsaker said. “We couldn’t do this without the generosity of our members who contribute to the Church’s Humanitarian Aid Fund.”

Welfare Square is part of The Church of Jesus Christ of Latter-day Saint’s worldwide effort to relieve the suffering of the poor and needy. In 2022, The Church has donated nearly 140,000 pounds of food to the region.

SVP is a non-profit organization serving economically-disadvantaged residents who live east of Havana to the Washington/Idaho border with a mission of preventing hunger and poverty alongside great community partners.