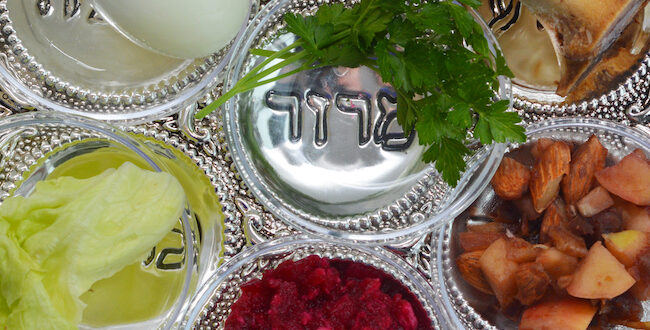 Spokane Rabbi Yisroel Hahn’s hometown is New York City, and the devastation of coronavirus has not skipped the street he grew up on. Two of his teachers and the rabbi from his block’s synagogue have died. Half of his family has tested positive.

“My neighborhood is unrecognizable. There are too many people who died,” Hahn said.

Panic hasn’t hit Spokane as it has in New York, Hahn said. When it does, faith will ease anxiety, and people will need to find that faith in their own homes.

He told the story of Jewish soldiers going to battle in World War II.

“What kept them going was saying, ‘If the bullet was meant to hit me, it’ll hit me regardless. If it isn’t meant to hit me, it won’t hit me.’ ” Hahn said. “Once you do your part, you have to trust that G-d will do the rest. … If everything is random, you really have something to worry about. There’s nowhere to quiet that fear.”

So experiencing Passover at home didn’t faze Hahn, and he doesn’t consider it a loss.

Passover Seder dinner, which celebrates the literal and spiritual escape from slavery, is meant to be a small family celebration.

Though Hahn’s synagogue, Chabad of Spokane County, usually has a celebration with 60 to 100 people, Seder at home is “the way it should be.” Hahn and his family will never forget the intimate ceremony.

To encourage members to make the most of isolation, Chabad of Spokane County offered Seder-To-Go kits to its members. Hahn suggested a $30 donation for each kit, which included matza, kosher juice or wine, a seder plate and condiments, and an English and Hebrew Haggadah, which is a text that sets forth an order of the Passover Seder.

Local churches are finding ways to bring ceremony into homes, too.

True Hope Church in Spokane created a PDF to guide their community through Tenebrae at home on Good Friday. Tenebrae, an ancient ritual, involves lighting and extinguishing eight candles to honor and mourn Jesus. Normally, a priest would read specific Scripture, and after each reading put out a candle.

Each dying candle represents Jesus’ life being snuffed out, said Ryan Oletzke, leader at True Hope. After the final candle goes out, the church would be in total darkness. Resolve would not come until Easter.

But this Good Friday (April 10), Tenebrae at church was not an option. And though True Hope already runs a podcast, sound didn’t seem to be enough. Neither did video.

“We didn’t feel like it would translate very well to video, especially with our technological capabilities,” Oletzke said. “We’re not Hollywood. We just had a couple weeks to reinvent that Tenebrae service.”

So he created a guide, so families could move through the ceremony in their own homes and experience it firsthand. The guide includes a Spotify playlist of spiritual songs which True Hope leaders chose to represent each scripture of the Tenebrae.

To step into the disciples’ shoes as they grieved Christ, passively taking in a video would not be enough, said Isaiah Paine, who operates communication and creative work at True Hope.

“We’re not good at mourning with people, we don’t like discomfort, we don’t like reminders of how finite we are and how little control we have in the big picture,” Paine said. “How can we help people not just consume something we put out but generate and participate actively?”

Leaders at True Hope and Chabad of Spokane share the philosophy that time alone, outside of your regular place of worship, does not only leave a gap. It also provides an opportunity to grow.

People need to create a space in their mind for acceptance and trust in God, Hahn said. With his roots in New York, he knows the seriousness of the virus and he feels that many people in our area have not woken up to the gravity of the pandemic.

But his message is of hope and acceptance. He called back to the story of Jewish soldiers accepting whether bullets hit or missed them.

“If I’m doing my part and following the guidelines of the CDC and I keep social distancing, then I have to completely trust God that the bullet won’t hit me,” Hahn said.

Oletzke and Paine see this stressful time as an opportunity for both rest and evangelism.

“We’ve talked about a theology of rest,” Paine said. “In our culture, it’s always a hussle. What does it look like to rest well? To sit still, to listen?”

True Hope has encouraged their members to reflect on the moments when Jesus made a difference and to share those online with #JesusChangedMyLife.

The Christian story is one of overcoming death and Oletzke hopes that story will carry our country and neighbors through the pandemic. Easter, in particular, teaches that death may seem like the worst possible scenario, but it was only the beginning for Jesus.

This Easter Sunday (April 12) Oletzke said his message was simple: you can have unshakable faith in Christ, even amidst death. Sharing this sentiment with people who are living without faith is a primary goal of True Hope.

“This is such an important opportunity and time for the church to declare that [faith],” Oletzke said. “There is death, thousands of people in America are dying because of Coronavirus, and we’re mourning, but we also want to point to hope beyond the grave.”

Please consider donating to FāVS so we can provide more local religion coverage like this.

Maggie Quinlan is a senior at WSU and former managing editor of WSU’s student paper. Maggie takes special interest in reporting stories from underrepresented groups, and likes to spend free time writing songs and hiking with her dogs.