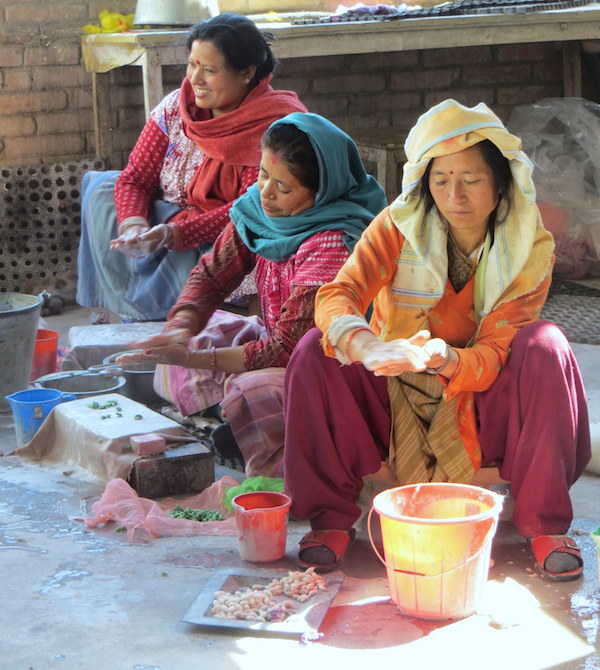 Back in 1984 “fair-trade” had yet to become a buzzword. But when Denise Attwood and Ric Conner took a trip to Nepal that year, it unexpectedly moved them to create a fair-trade business in Spokane.

Attwood and Conner — both avid backpackers — went to Nepal to visit environmental groups, and one of the Tibetan refugee families they met made them sweaters. After buying the sweaters and taking them trekking, Attwood and Conner thanked the family and the family said they needed help selling their products so they could have income to send their kids to school.

The two hesitated. Attwood was on her way to law school, Conner was a fisherman in Alaska and they didn’t know anything about selling fair-trade items, Attwood said. But they decided it would be a good way to get money directly into that family’s hands. So they bought some of the family’s products and when they returned home, they rented a theater to show a slideshow of their trip and put out the family’s products. The people who came loved the products, Attwood said.

Just like on the game show Let’s Make a Deal, Attwood and Conner found themselves facing several metaphorical doors with different choices — one was the choice to keep selling items made by people in Nepal.

“We just opened that door and said, ‘Let’s give this a try,’” Attwood said.

Conner returned to Nepal and met with several families, including the family who made them the sweaters, and agreed to buy some of their products and try to sell them. That was the birth of Attwood and Conner’s fair-trade business, Ganesh Himal Trading, which is putting on the Festival of Fair Trade this weekend at the Community Building in downtown Spokane.

“A long time ago people would say, ‘What is fair-trade,’” Attwood said. “Now, 30 years later, fair-trade is a fairly common word.”

What started as a $400 investment in 1984 has grown so that this year Ganesh Himal sent $430,000 back to Nepal, Attwood said. The business now sells products made by Tibetan refugees and women in Nepal to more than 200 retail stores throughout North America.

Some people approach fair-trade from a faith outlook, Attwood comes at it from a social justice and humanitarian approach, she said. Ganesh Himal works with Buddhists, Hindus, Muslims, Christians, atheists, etc.

“This is the thing I love about fair-trade; people come at it from many different perspectives and the core mission is social and economic justice, especially for those who are marginalized in world,” Attwood said.

Ganesh Himal started doing the Festival of Fair Trade to educate the public about fair-trade and how buying decisions can build a more secure future for artisans. Now in its 29th year, the festival has grown to include several other local fair-trade businesses that import from Guatemala, Chile, Mexico, Pakistan and Thailand.

Among the wares at the festival this year, are hand-woven textiles, hand-knit hats, mittens and scarves, jewelry, clothing, coffee from Guatemala, wooden flowers from Chile and paper products, such as journals.

Attwood said one of her favorite products at the festival are handbags made by a group that upcycles goods and saves tires that are being burned and creating pollution.

The Festival of Fair Trade is located in the Community Building at 35 W. Main Ave., near Kizuri, now through Dec. 1 from 10 a.m. to 5p.m.

A screening of the independent film “Half the Sky,” which talks about the oppression of women across the globe and what some women are doing to change it, will be at the Magic Lantern on Nov. 30 at 2 p.m. for a $5 donation.

Attwood will speak before the movie about moving beyond paralysis, working toward change despite how huge the problems might look and the Power of 5 program that she started to help girls stay in school in Nepal.

Jo Miller grew up in Southern California, but came up to the Northwest to attend Whitworth University, where she received a bachelor’s degree in journalism and philosophy.

Previous Trying something new
Next “Half the Sky”