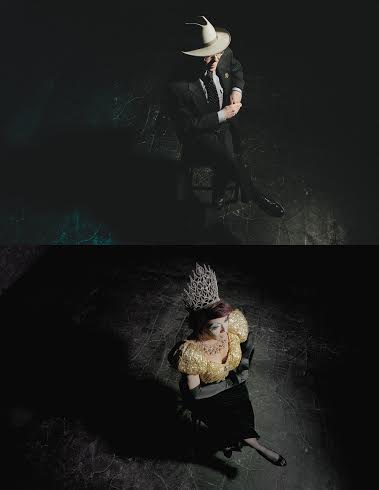 Jason Johnson isn’t what one might expect the typical Episcopalian to look like. Then again, most male Episcopalians don’t dress like women, wear make-up or sleep until noon.

“When I first started, it used to take about two hours,” Johnson says, as he begins to apply the cream foundation to his face, neck and chest. He stops just short of his chest hair, trimmed and plucked to a deep v-neck. “But I’ve done it for so long, it’s like drag-by-number.”

Johnson is one of the few drag queens in Spokane who has been able to make a living as a drag queen. For most others, it is an expensive hobby.

And, while Johnson would be what his mother calls a “High Holiday Anglican,” Johnson none-the-less considers himself a Christian.

“You don’t have to celebrate a mass to have a relationship with Christ,” Johnson says.

Growing up in a religious ranching family in Wyoming, Johnson was active in the Episcopal church. From an early age, Johnson knew two things about himself; that he was gay, and that he was called toward ministry.

“I grew up thinking that I was broken, and I fled to my spirituality to escape from it, hoping that God would heal me,” Johnson said. “But then I realized I wasn’t broken, and God wasn’t going to cure me because I wasn’t sick.”

He lettered in rodeo roping at Douglas High School just like his father, and at one time was an all-state champion in rodeo roping. With scholarships in rodeo, as well as debate and livestock appreciation, he went on to attend college at the University of Wyoming. It was there he first started to perform drag under the mentorship of Gregory Ellis, the original “Nova Kaine.”

Or, at least the queen who held the name before passing it down to Johnson — the original Nova Kaine was the queen who threw the first brick at the Stonewall Riots back in the 60’s, when members of the gay community in Greenwich Village fought back against a police raid. It’s considered by many as the landmark event that kicked off the gay rights movement. Technically, Johnson is the sixth in the line of succession.

Johnson trained under Ellis for several years before Ellis retired from drag in ‘93, due to complications from AIDS.

Johnson went on to attend seminary at the College of Emmanuel and St. Chad in Saskatoon, CA. He was to be ordained into the Episcopal church, in a log cabin church built by his great-grandfather and grandfather.

“It was two weeks before ordination when I finally realized I don’t believe everything in the church,” Johnson says. “I didn’t need a collar to prosthelytize. Living by example and reaching out, especially through the gay community, it was even beneficial to not have a clerical collar.”

Johnson still adheres to the core tenets of the Episcopalian faith; the Nicene Creed, the holy apostolic and catholic church, that all a part of the body of christ. But for the most part, Johnson says he believes spirituality to be highly personal. For example, Johnson doesn’t believe in a vindictive or vengeful God.

“I don’t believe in hell,” Johnson says. “Quite frankly, I think God is a little too busy to give a shit about what I ate for breakfast. I think he has bigger issues on his plate.”

When Johnson came home after his first year in college, he brought home his boyfriend Chris. When Johnson’s father learned that Chris was in fact a man, he told Johnson in no uncertain terms that he would not have one of “those” in the family, nodding towards the shotgun behind his desk. Johnson and his father didn’t speak for another 10 years.

Years later, Johnson now helps young men meet with their parents when they decide on coming out of the closet. His role isn’t so much advocate as it is mentor and mediator, he says. Because of his education, in these situations parents are more likely to listen to his expertise.

“Especially with the younger people, it’s nice to have somebody established in the community who can speak to their parents,” Johnson says. In every case, education is the best antidote.

“We’re all very scary until you get to know us,” Johnson says, quoting Harvey Milk, the first openly gay person elected to public office in California. “I mean, we still have to pay our taxes, we still mow our yards, we don’t do anything differently than anybody else, except in the privacy of our own homes.”

On the high holidays, Johnson can be found at the Cathedral of St. John the Evangelist, an Episcopal church on the South Hill. Johnson says he loves the pageantry and the ceremony. Among protestant denominations, the Episcopal church is among the most progressive when it come to openness towards homosexuals. In the 1980s, a bishop of the Episcopal church declared he was gay. In the past few years, the church has authorized a liturgy to be used to bless same sex unions. He says he sees no conflict between his lifestyle and his spiritual beliefs.

“My spiritual beliefs mold who I am as a person,” Johnson says. “I think it’s more common, not just in the drag community but in the gay community. People are able to go back to church and feel welcomed.”

Lucas Thayer was born in Spokane and currently resides there with his girlfriend, his cat and his dog. He recently received his degree in journalism and mass communication from Whitworth University. While raised in a Christian household, he says he doesn’t subscribe to any belief system, and considers himself agnostic. His interests include writing, hiking and competitive basket weaving.