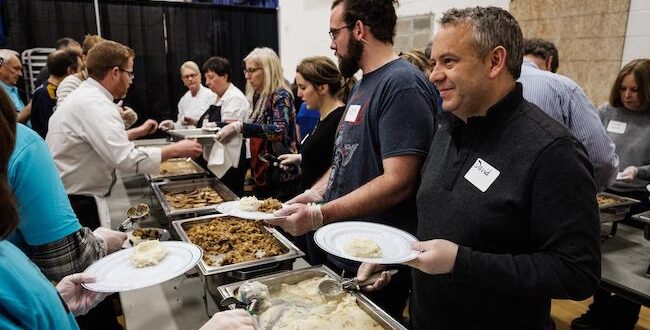 In any normal November, Spokane’s Union Gospel Mission would be planning a Thanksgiving for its residents that’s as close to home as most of them have been in a while. There would be a church program with music and singing, and children running around the dining halls playing games. There would be the traditional turkey feast, with residents and staff alike chatting intimately as they pass stuffing and potatoes down the table.

For residents of the Mission’s recovery programs and those living in its crisis shelters, that sense of family around the holidays is a critical step towards healing hearts and souls, according to JoAnn Zajicek, director of women’s ministries at UGM. But like so many other occasions this year, Thanksgiving won’t be celebrated as intimately at their recovery homes and shelters.

“We always hope to make holidays here a very special experience, because so many of our ladies have never experienced that family-oriented time of the holidays,” Zajicek said. “But now, unfortunately, we’re having to reconsider how all of that looks. We’ll just be having a simple, quiet Thanksgiving at home this year.”

In UGM’s case, residents will still have the traditional feast and a time to gather – but it will have to be from socially-distanced tables, and the stuffing will be served from a line rather than shared between residents. Families around the Inland Northwest and around the world are wrestling with the same dilemma this holiday season – whether to gather and support one another through the end of a difficult year, or to stay apart and minimize risks.

In homes and churches around Spokane, clergy are wondering how to tend to their congregants’ spiritual and emotional needs while still encouraging their physical safety during a pandemic.

The Rev. Todd Eklof, minister of the Unitarian Universalist Church of Spokane, said the church typically holds a Thanksgiving service that draws worshipers from all over the region. While a livestreamed alternative is being planned for this year, Eklof knows it won’t be the same. But now more than ever, he thinks Thanksgiving holds a special significance whether celebrated in person or apart.

“There’s always a huge value to Thanksgiving as a time to literally sit and count our blessings surrounded by family,” Eklof said. “We’ve had a really odd year. It’s time especially to stay upbeat and build support and stay positive to get through the drudgery and uncertainty ahead.”

Eklof said he isn’t sure what his congregants have planned for their own celebrations, but he believes most members have been “extremely cautious” throughout all stages of the pandemic. The UUCS was among the first churches in the region to cancel in-person worship entirely back in March, even after state guidelines would have allowed up to 150 people in the building, Eklof said.

“Telling members how to celebrate isn’t my role as a Unitarian Universalist minister in particular, where we’re pretty focused on people having the freedom to make their own decisions,” Eklof said. “But what I do is try to model.”

Eklof’s own celebration will keep in line with Washington’s recently tightened restrictions on travel and indoor gatherings. As transplants to Spokane, he and his wife usually share holiday meals with another family from the church. Instead, this year his grown children will Zoom in from Kentucky and Seattle for a socially distanced family meal.

“There are things to be thankful for this year, just like always,” Eklof said. “Some are perennial, like family and food and cats, and dogs who wag their tails – but especially we can be thankful for things like Zoom that allow us to keep being connected.”

Like Eklof, Pastor Miles Rohde of Redemption Spokane will be observing Thanksgiving in a quiet, minimal way. With COVID-19 cases skyrocketing in Spokane and beyond, he said a few of his family members no longer felt totally comfortable gathering in person. But if that were not the case, he’d welcome them one and all into his home.

“We’ve seen now that the need for insulation, not isolation, is really reaching a critical point,” Rohde said. “I would welcome and invite my family in, because I think we’re able to make those decisions on our own without the government entering into homes and church life. But there is a difference between wisdom and foolishness.”

Redemption has been meeting for Sunday services in person since Phase 2 with limited capacity. Rohde said the church doesn’t usually plan any Thanksgiving-specific events, but members without family plans will often gather to celebrate. Rohde hasn’t encouraged those sorts of gatherings this year, and he hasn’t heard any plans to the contrary. But he feels the choice on how to celebrate is very much a personal one.

“One of the Christian ethics we teach from Scripture is that we give deference to the weaker brother or sister in terms of their conscience,” Rohde said. “If someone is wrestling with not feeling right about traveling or gathering, even if they have every right to do so, then their conscience is correct. We defer to that, not to give everyone their way, but out of love.”

Move Out of Fear

Rohde said he would encourage congregants who can’t decide how to celebrate to first determine whether their conscience is being “tricked” or guided by fear versus by the Holy Spirit or by Scripture. Part of his responsibility as a pastor, he said, is to move people out of fear and into wisdom. But he also feels a decision should come from a place of love.

“Trumpeting liberties and freedoms over love of neighbor or of family or friends will never end well,” Rohde said. “The Apostle Paul talks about this in 1 Corinthians 13 – ‘If I speak in the tongues of angels, but I do not have love, then I gain nothing.’”

Though his own Thanksgiving celebration will be small, Rohde said he hopes to hold space for what’s been lost this year alongside gratitude for what remains. Lament, he said, can be a powerful counterpoint to gratitude and joy.

The Integrity of Thanksgiving

At UGM, Zajicek knows there will be plenty to mourn – some residents have to quarantine, keeping them away from the celebration altogether. Mothers who have recently reconnected with their children won’t have their children join them for the recovery home’s feast. It’s easy to get depressed about what’s missing, but Zajicek takes heart in what’s still there.

“We’re holding the integrity of Thanksgiving no matter what it looks like,” Zajicek said. “But we still take time to say ‘Thank you, Lord, we’re grateful for turkeys and communities and an abundance of masks.’ We still have provision in a season of hardship. Nothing stays the same as much as we’d ever like it to, but we can still keep our hearts full of gratitude.”

Riley Haun is a freelance writer and sometimes-barista living in Moscow, Idaho. She graduated from the University in Idaho in 2020, where she wrote for student publications The Argonaut and Blot magazine. She’s also written for The Spokesman-Review, Inland360 and Nspire magazine. Though she isn’t religious herself, she’s fascinated by the ways faith interacts with the world around us, and she loves telling stories she never would have heard otherwise through her work with SpokaneFāVS. When she isn’t writing or slinging coffee, she’s probably baking or cooking with her corgi, Linda.

Previous We Can All Find Something To Be Thankful For This Year, Even Me
Next Thanksgiving has always been about grief. Pass the mashed potatoes.