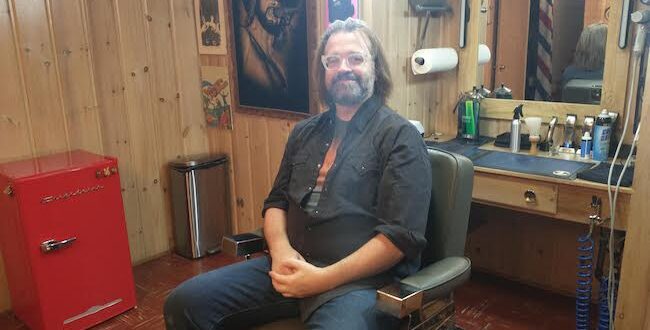 For Spokane barber Jefferson Workman, his Buddhist and barbering practices go hand-in-hand, shaping his business as a place where clients can go and face no judgment.

When he was 35-years-old, Workman felt he was “a rope twisted on a limb” in his life without much direction.

Even though he had been raised in the Episcopal church, he said he knew that was a place he didn’t want to go back to and was searching for something different. It was when a friend gave him a book on basic Buddhism that he found his way to the Spokane Buddhist Temple.

A year after his first visit to the temple he started his 20-plus year relationship with them, serving on the board of directors for over 10 years and as a minister’s assistant for four years.

Workman said he stepped away from his volunteer work at the temple after losing his job and going to help his mom who was experiencing the beginnings of dementia.

When he was 50-years-old, he started barber school, eventually leading him to starting his own business.

The term bombu in the name of his barbershop “Bombu Barber,” he said, loosely translates to “foolish person” or “ordinary person,” and the bombu nature is something everyone shares. His shop is a one chair studio in the North Hill neighborhood.

“It cultivates a sense of compassion for everyone, which then helps you become less judgmental of everyone else because you understand everyone shares the same thing,” Workman said.

The idea applies to his work as a barber because he meets people from all walks of life; different faiths, political points-of-view and economic levels.

“So, I try to keep that thought in my head that we all have the same experiences in life no matter what we have. At the core, we all share those failures and those foibles,” he said. “So when you sit down in my chair, you and me are the same people, the same level. So I try, I’m human, but I try to make no judgments.”

He added he approaches everyone as someone who is looking for a good haircut.

“How can you not be humbled by all of those things that had to happen for us to share this moment and for us not to respect and honor this moment that we have right here?” he said.

When someone is sitting in his chair, he views it as a once-in-a-lifetime experience that they’re both sharing. It may be a mundane experience, but he said it is a humbling one because it has happened.

Active listening, he said, is another part of being a barber that intertwines with Buddhism where people should use their ears more than their mouths.

While having a conversation with a client, he said they might come to some points about things that may be different between the two of them. However, he added that he always tries to have an open mind to listen to whatever they say and not make a judgment about it.

“We can come [to my shop] and we can enjoy each other as people in this spot without having all of those outside influences affect us,” he said.

When someone is in his chair, Workman said he doesn’t hold any preconceived notions about them and hopes that they will learn more about each other and maybe share about the human condition with each other.

For Workman, he said the most important thing in a journey is not point A or point Z, it is everything that happens in-between. Even though the end result is great to see, he looks at how the journey was to get there; what did a person have to learn or explore.

He views the 45 minutes he has with a client as a journey and they are his total point of focus, trying to give them the best haircut that he can.

Workman described him having a conversation with a client and walking away with them learning something about each other further develops his practice in the dharma.