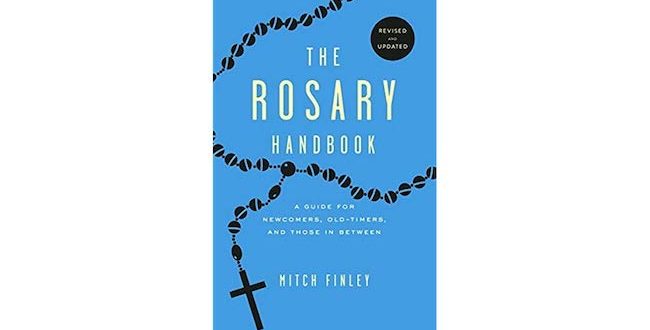 The Rosary Handbook by Mitch Finley

Growing up as a Protestant in Grangeville, Idaho, Mitch Finley didn’t know anything about Catholicism. That is, until the third grade when his parents sent him to Sts. Peter and Paul Catholic School.

His teachers there were nuns and emphasized prayer, the Rosary and the purity of Mother Mary.

“For some reason all that stuff really grabbed me,” Finley recalled. “I just soaked it in.”

He later converted to Catholicism and went on to write more than 30 books about the faith, including “The Rosary Handbook,” which was recently updated and re-published by The Word Among Us Press.

In it, Finley explains the power of the Rosary as well as its history and mysteries. The book also includes guides on praying the Rosary.

“Catholicism is a very sensuous religion. Catholics like to be able to reach out and touch and and taste and smell and use all their senses as a way to be  in touch with the divine mystery, and that’s one reason I think the Rosary has always remained so popular,” he said from his Spokane home.

Now retired, Finley said “The Rosary Handbook” is one of the favorite he’s written because it’s proven to be helpful to people, and because he approaches the Rosary from an angle he says many authors have missed.

The Rosary, he said, isn’t magical. It’s not a way to get God to do something.

“I wanted to write a book that was scriptural, had good theology behind it, that wasn’t sentimental or romanticized and that would appeal to a reader’s intellect as much as their emotions,” he said.

The Rosary, he explained, is invitation to pray always, as Paul wrote in 1 Thessalonians.

Matthew Sewell, a local Catholic, said praying the Rosary has helped him get through various low points in his life, and said it serves a reminder to model Mary’s humility.

He said having something that’s meditative and regimented and constant, like touching and feeling the beads, is meaningful to him.

He carries a rosary with him that his wife gave him the night before his wedding.

Finley carries one on his keychain and prays it throughout the week. In his book he gives basic instructions on praying the Rosary, but notes that there is no right or wrong way to do so.

“There are no ‘Rosary police’,” he writes.

“One of the great characteristics of the Rosary is that it really suits almost any occasion. If you’re happy, or sad or worried, somehow it fits no matter what’s going on,” Finley said, adding that using beads to count prayers isn’t unique to Catholicism.

Finley’s wife, Kathy, is also a local Catholic author. Learn more about their work at mitchandkathyfinley.com.

Mitch Finley is the new Ask A Catholic columnist for SpokaneFāVS.

Previous This Thanksgiving, I Gave Thanks for the Church
Next Fix Yourself First