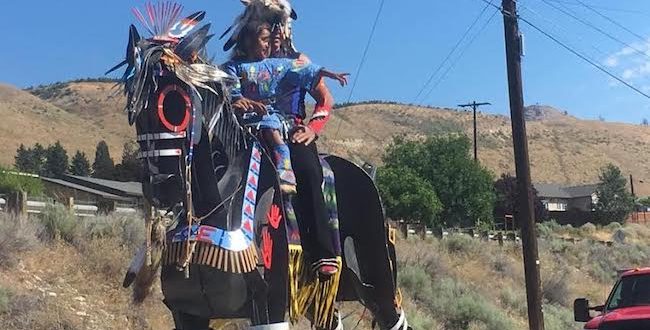 Despite troubled beginnings, Virgil “Smoker” Marchand, an artist and member of the Colville Confederated Tribes, found a calling in sculpting and metalwork, eventually making his way to designing glasses frames for Encore Vision.

Growing up, Marchand said he never had an idea that he would be an artist until he was accepted into the Institute of American Indian Arts in Santa Fe, New Mexico with his brother in 1969.

“It was a life-changing experience for me, I found talent I never knew I had and it was an environment where I was treated like everybody else and I think that was the biggest thing that changed my life,” he said.

After graduating, Marchand did not go back to school for art and instead focused on creating more works and expanding his artistic horizons.

Despite being a 2D artist for many years, Marchand has been focusing on steelwork since 2000 where he found most of his inspiration.

“When you do a painting, you have to tell a story and everybody wants to hear it, but with steelwork I don’t have to do anything,” he said.

He added that it was frustrating for him to be a 2D artist because he had to travel everywhere and finance it, but because steelwork has enabled him to work from home, he now has people coming to him asking for his art.

When he first started making sculptures in 2000, he thought it would only last two-to-three years, however, due to the success of his work and through word of mouth he has continued with his work, resulting in hundreds of sculptures being made.

He has made sculptures in places like Arizona and Canada, saying that his tribe and culture were part of Canada and has been able to practice his culture and traditions by making his art.

Not only that, his art has brought people together, particularly one of a man, woman, young boy and young girl dressed in regalia he made for the Apache tribe in Arizona. Five bands of the tribe were brought together in one place for the first time in decades during the unveiling of the sculpture where Marchand was told, “You know what you did, you brought our people home.”

Besides sculptures, Marchand has also gotten into making glasses frames for Encore Vision in Spokane as part of their Native Vision line.

Teri Harris, general manager of Encore Vision, said the company began supplying eyewear for tribal members of the Colville Indian Health Service Unit in Nespelem, WA in 2008.  Despite not being Native American herself, the frames she designed proved to be popular with the Colville Tribal members, which made her decide it would be better to enlist the help from a local Native artist to better their culture with true Native American designed artwork.

Harris’s search eventually led her to Marchand in 2009, with Native Visions being established in the middle of 2010.

After receiving samples of frames, Marchand realized the challenges ahead because there was not much room on frames to do a lot of creative work.  He added that the laser cut had to have space and that the frames had to have holding power to make sure they were not too weak.

“Once I started figuring out what I could do with it, then the creative spirit kind of took off,” he said.

Marchand currently has over 13 designs for frames and is looking at crafting some more in the future.

Native Visions currently sells frames within several states including Washington, Oregon, North Carolina, Oklahoma and California, among others.  Harris said they are actively seeking to expand more in the Midwest and back East,

“Smoker is a very versatile and gifted artist with abilities in several types of artwork,” Harris said.  “I knew by speaking to him and seeing his original drawings that we could accomplish beautiful eyewear with his unique and intricate designs.”

Through your donation we can provide more religion coverage just like this!

Previous Ask A Jew: Wasted Prayer
Next Ask An Evangelical: What is Your Opinion on Sigils