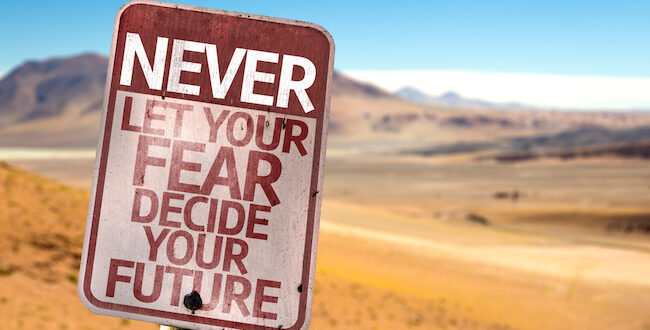 Everyone experiences fear at some point.

I remember being terrified the first time I was asked to jump a horse. And a close call on the Oregon coast – driving too fast on a curvy road – left my heart pounding for what seemed like days.

But there is a difference between fear in the moment and protracted fear, a fear that lingers over time and begins to affect our attitudes and behaviors.

And it is that sort of protracted fear most of us confront today. There are so many things to fear.

The coronavirus pandemic has shut down our economy, eliminated jobs, killed 200,000 Americans, and confined many of us to our homes except when we don a mask to go outside. Will we be among the potential 400,000 U.S. fatalities by year’s end?

Climate change is producing immediate impacts in the form of destructive natural disasters, even in our region where wildfires have been taking lives, destroying towns, and filling our air with dangerous smoke.

Our racial divisions once again have been brought into sharp focus as the Black Lives Matter movement has responded to public airing after public airing of the killing of unarmed African Americans, too often at the hands of police. Meanwhile white supremacists and anarchists have taken advantage of street protests to foment violence in too many of our cities.

And not one of us has endured an election cycle as frightening as the 2020 presidential election. Will Biden beat Trump and if he does will Trump leave the White House? Will armed militias strike in an effort to keep him in office? What will the military do if Trump calls for martial law? These are not idle questions. Some of the president’s advisers, and Trump himself, have specifically set the groundwork for a disputed election and subsequent violence in the streets. Is it too extreme to fear for the future of our democracy?

So, we have a great deal to fear these days. And yet life goes on, must go on. How do we cope? How do we survive amid such uncertainty?

Psychologists and social scientists have advice to spare.

I try to do all those things in my own life, but with mixed success – which is almost certainly typical of just about everyone.

There are times, especially in bed at night or just as I wake up at dawn, when my thoughts begin to spiral. Like many, I lost sleep the first two nights after Ruth Bader Ginsburg died, tossing and turning as one horrific scenario after another filled my thoughts.

But in general, I try to use all the above strategies to maintain some peace of mind.

Tough Times Have Come Before

Most important, perhaps, I try to remember that most of us have lived through tough times before and that history tends to run in cycles. I have written before about the tumultuous events of 1968 that were nearly as horrific as those of 2020.

The other day, my 31-year-old son sent me this message, “Ginsberg has died. This will be the ugliest six weeks in American history.”

Tough times come and go. And we have every reason to be fearful when the bad news piles up quickly and dramatically. But memory that provides context is a good coping tool.

Collective fear, as Franklin Roosevelt understood so well, can paralyze a nation. His 1933 inaugural declaration has become cliché. But it was true then and it is true now.

“So, first of all, let me assert my firm belief that the only thing we have to fear is…fear itself — nameless, unreasoning, unjustified terror which paralyzes needed efforts to convert retreat into advance.”

Living in a time of fear challenges each of us to manage our individual fears and it challenges us as a society to not let fear stand in the way of action, to avoid the paralysis that threatens our advance.

It is not easy for any of us especially as it is likely things will get worse before they get better. But people and societies that learn how to cope in the toughest times are more readily able to take advantage of good times when they return.

And history tells us with absolute certainty, these fearful times will pass and we will enjoy the good times all the more.

On Saturday at 10 a.m. FāVS will host a Coffee Talk discussion, “Living In A Time of Fear.” Smith is a panelist. Register here.