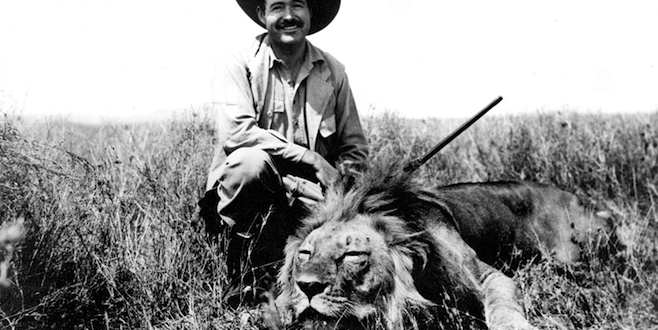 Ernest Hemingway on Safari in 1934/Wikipedia

This summer I’ve been reading Ernest Hemingway’s Short stories. One of them, “The Short Life of Francis Macomber” has the killing of a Lion on a African Safari as the center piece of its tale. My reading has been juxtaposed with Cecil the poached Lion story and the Planned Parenthood baby parts trafficking expose by the Center for Medical Progress. The Internet exploded like a nuclear bomb as celebrities and outraged citizens launched a first strike against the hunter and trophy hunting.
The passion and anger that has arisen of the death of this lion has equalled that of the pro-life movement outrage over the Planned Parenthood video fiasco. The Planned Parenthood subject has been driven all the way to the Congress as various initiatives have been launched to defund Planned Parenthood of the $500 million of American tax money.
It’s been quite the ruckus online for this little conservative leaning libertarian pastor. I am currently 244 comments deep in one of my pro-life Facebook threads on the Planned Parenthood subject. I have been stunned by the reasoning and conclusions that have come out in these conversation with pro-choice advocates. None more than the conversation below that would even surprise the Eugenics promotor and founder of Planned Parenthood, Margaret Sanger wince in shock!
The question posed:
“So up until the age of 3 or 4 abortion is not murder by your standard?”
J.W.’s answer:
“That’s right. Biologically we are born with a biochemical predisposition to want to feel protective of children because humans in the past who had this impulse were able to pass on their genes more successfully (since the impulse caused them to protect their children from harm), but if you think past the impulse you’ll see that older lives are far more valuable than young ones, since they have the experience necessary to be empathic, productive, and reasonable. Humans under the age of three don’t even fulfill the very name of their species, “human”, which means having the ability to care for others. This is obviously not to say that children are worthless and should never be protected as though we were sea turtles who lay eggs and just leave; obviously protection of children is important to ensure the furtherance of our race. But since children under 3 don’t have any current inherent value (aside from the feelings of value being reinforced by your chemical impulses telling you to protect all children), and will only become valuable later in their life, it isn’t imperative to ensure children are being born to mothers who don’t want them, as they are far less likely to be raised in an environment which actually makes them valuable later.
I believe in the practicality of decreasing the birth rate of the world to fight overpopulation and working toward the end that the children who ARE being born can be the best children they can be.”
This is the full bloom of the ideology that produces eugenics, holocausts and genocides.
I am glad that I have had the opportunity provided by these videos and conversations because they have exposed many of the malevolent roots and reasonings behind the practices that lead to discussing money over baby parts. The amount of retread these events of late have given to the pro-life movement is immeasurable. Never has the contrast been so apparent and that leads to a better ability to defend the cause of life.
The Affordable Care Act, also known as Obamacare, invested heavily in community health centers, allowing the Community Health Center Fund to allocate $11 billion over five years to centers across the nation. I celebrate the use of tax money to provide safe and accessible reproductive health services for women. I oppose federal funding of mid, late and now post-term abortion.
I hope the images of dead lions and dead babies will lead to the defunding of Planned Parenthood of Federal money and strengthen the cause of life for many decades to come.