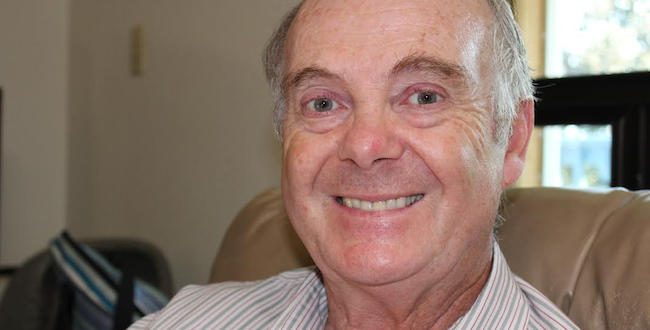 Gordon Jackson is an educator and writer who often addresses his Christian faith.

But he is not a theologian. He is a journalist.

Jackson taught in the communications studies department at Whitworth University for 32 years before retiring in 2015. His areas of expertise are news and feature writing, media ethics, media law, and media history. He still teaches a professional writing course for the university’s evening program.

His favorite part of teaching at Whitworth was the process of developing relationships with colleagues and students.

“Whitworth students are highly motivated and are very nice people to be around,” he said. “ I’m in touch with a lot of students, and I remember my very first advisee that I had in the fall of 1993.  I still get Christmas letters from her.” 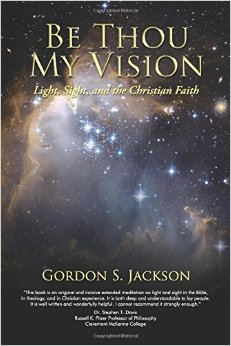 His new book, “Be Thou My Vision: Light, Sight and The Christian Faith,” is an exploration of light and sight in the Bible. Three experiences in Jackson’s life prompted him to write it: his vision impairment as a result of the eye disease glaucoma, an essay by a Christian professor at Saint Olaf’s University in Minnesota, and his amazement at the many references to light and sight in the Bible.

“The professor was speculating as a biologist about what happens when we see things, and he was speaking about the incredibly complicated processes that happen in our eyes,” he said. “Then he asked, ‘What does it mean to be made in the image of God?’ That just struck me and I asked myself, ‘What does vision mean for our [Christian] faith?’”

The book contains 32 separate ideas broken into three sections on light, sight, and how we look, what to look for and ways of looking.

The first section on light examines biblical texts proclaiming that Jesus is “the light of the world” and that his followers are children of the light. It also includes instances of fire in the Bible, such as the text where God appears to Moses in the form of a burning bush.

On the contrary, Jackson also writes about darkness and its role in Christian faith. One desperately needs darkness in both the natural realm and their walk with Jesus, he said.

The second section on sight analyzes threats to sight and blindness in scripture.

“We think of Jesus as doing miracles to heal people,” Jackson said. “But what about those instances in scripture where God actively intervenes and causes blindness, like he does with Saul?”

Writing and faith are two integral parts of Jackson’s life, and he said the opportunity to combine them in various projects has been “very gratifying.”

“Be Thou My Vision” is his 12th book. Seven of his books are anthologies of quotations that cover theology, travel, media and free expression issues, paradoxes, and children. Shortly before he retired from his teaching position, he wrote a book on the importance of Christians’ free expression and the common good.

“The argument is basically that Christians need to take free expression seriously,” he said.

Jackson’s spiritual journey began at 12 years old when he made a Christian commitment and he has continued to grow in his faith as a member of various traditions. Over the years, he has attended a congregational church in Cape Town, South Africa, the Lutheran Church, Baptist churches and Presbyterian churches. Now, he and his wife attend services at Covenant United Methodist Church in Spokane.

“One of my beliefs is that people who are in mainstream Christian traditions are essentially speaking the same language but with different accents, and sometimes those accents may be difficult to understand,” he said. “But all of those traditions have a common core that resonates across theological boundaries.”

Jackson grew up in Cape Town, South Africa, which lies on the south peninsula and is the second most populated urban area in the country. He completed three bachelor’s degrees in the social sciences by 1972, and moved to Illinois in 1974 to pursue his M.A. in Communications at Wheaton College.

The culture was not drastically different at first. Americans simply “talked funny and drove on the wrong side of the road,” he said. Then, several experiences pinpointed major differences. For example, it took time for him to understand that people didn’t mean it when they asked, “How are you doing?”

In 1976, Jackson traveled to Johannesburg, South Africa, and worked as a reporter and news editor for the weekly news magazine To the Point for three years. Afterward, he attended Indiana University 1979 to 1983 for his doctoral work and began teaching at Whitworth that year.

Teaching is not much different than writing, he said.

“Everything you write is for a reader or, if you’re broadcasting, for a listener or viewer,” he said. “Beginning with the students, you have to say, ‘Where are they and what are their needs?’ You treat them with respect and affection.”

Tags Be Thou My Vision: Light gordon jackson Sight and The Christian Faith whitworth

Previous Trump condemned anti-Semitism. What about Islamophobia?
Next Holocaust survivor to speak in Spokane