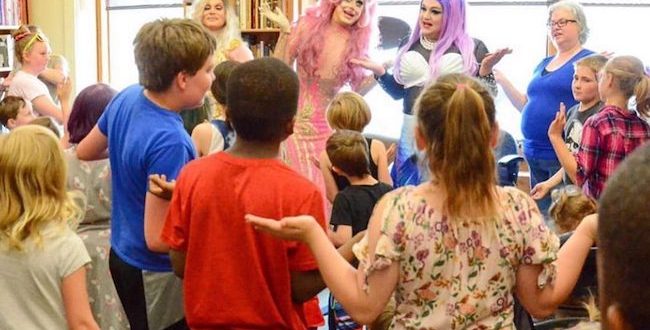 This story has been updated

On June 15, drag queens and kings will be inside the South Hill Library to spend time with children and teach them about gender diversity, but outside it’s expected that in response to the event hundreds of protestors and counter protestors will be swelling into South Perry Street.

Drag Queen Story Hour started about four years ago in San Francisco with drag queens reading to children and has since grown into a national event.

Andrea Tate, a local drag king who goes by Tirrany, pitched the idea to the Spokane Public Library last year and said the Spokane events will include story time, crafts and will end with a dance party.

“So many kids come from different kinds of families,” she said. “The goal is not ‘you should be a drag queen,’ it’s ‘whatever you are is perfectly fine, it’s what you were meant to be.’ That’s the entire purpose.”

A second Drag Queen Story Hour is slated for June 22 at the downtown library.

However, a group called 500 Mom Strong opposes the story hour claiming that drag is misogynistic and is organizing a protest on June 15, “To end the sexist misogyny of drag and to protect children from the sexualization of Drag Queen Story Hours.”

Organizers of the group didn’t respond to requests for comment.

“We knew that there might be some opposition to it, I don’t think any of us expected the hoopla that is surrounding all of this. We weren’t expecting it to be so vitriolic,” said Ellen Peters, community engagement manager, South Region.

Peters has been receiving hate e-mail and fielding angry phone calls because of the event. However, she said that after combing through hundreds of comments on social media, perhaps more people are voicing support for the Story Hour.

According to their Facebook event, “A group of closed minded and disgruntled women have started a Facebook group called 500 Mom Strong and they have planned to protest the Drag Queen Story Hour. Well honey, get ready to see some DRAG QUEENS! That’s right, put on your best drag and come on out to help us protest the protesters!.”

Peters said that the Drag Queen Story Hour fits with the vision of library system, which is, “To inspire a thriving city through cultural and educational opportunities.”

The story hour, she said, is just of many eclectic events the library organizes. Earlier this month the South Hill branch hosted, “The Muslim World and Muslims in Spokane,” and in the past the library has featured events about Judaism.

However, those events haven’t drawn the attention or controversy that Drag Queen Story Hour has.

Tate said she hopes kids will come to the  Drag Queen Story Hour despite the protests.

“I want it to be a magical afternoon so that when they’re 35 years old and remembering their great moments of childhood, this will be one of them,” she said. “I’m hoping everyone will be thoughtful of the fact that this is a children’s event. There needs to be civility in order for kids to understand that disagreeing with people doesn’t have to be a violent or aggressive thing.”

Because so much controversy has been surrounding the Drag Queen Story Hour, the Spokane Public Library is hosting a panel discussion June 13 from 7-8:30 p.m. at the downtown branch, 3rd Floor Lens. Panelists will include a drag queen, a child psychologist, a gender studies professor, and a Christian minister. The discussion will be moderated by Skyler Oberst.

“We want it to be civil and informative,  we don’t want it to be an argument,” Peters said. “We want kids to have fun, but at the same time learn a little something about diversity.”

Your donation can help us provide more local news coverage like this!

Previous Ask An Evangelical: Does a non born again Christian have God’s ear?
Next FāVS and SPR Episode 4: Purity Culture