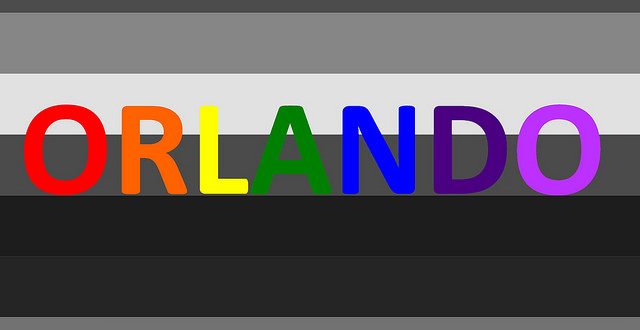 At 3:30 yesterday morning, I had just finished Fajr, the dawn prayer. I opened my phone reflexively to check social media and a world of grief poured in. Dozens dead at Pulse nightclub in Orlando, hundreds terrorized. Immediately, I was taken by a visceral anger. My hands began to shake, fire bursting to life under my skin. I’m heartbroken and furiously weeping for a community so dear to me. I don’t want to write. I will admit that in this political climate, I have been too scared to write. I’m still scared, but silence is not an option any longer.

Homophobia and transphobia are normalized in our culture, and constitute some of the most despicable of American “values.” These values thrive in our soup of toxic masculinity and fragile patriarchy. There are too many examples of the bigotry LGBTQ people are forced to endure from their fellow Americans. This week, there were hate preachers in front of Lewis and Clark High School (my alma mater), spewing their vileness at LGBTQ students in the name of Christianity. Violence against people who are visibly trans or gender non-conforming is rising, with bigots from all faiths and walks of life empowered by hateful political rhetoric. I wear an #IllGoWithYou button every day for a reason.

If you are a person who holds bias against LGBTQ people, and if you also happen to be a person of faith, you’re probably already using your religion to justify your contempt. This includes those “hate the sin” folks who try in vain to distance themselves from the vile bigotry they continue to drag into their own faith.

The shooter was Muslim. I won’t say he wasn’t, because the practice of takfir (excommunication) is also a source of violence, especially for LGBTQ Muslims. Takfir is what Daesh terrorists do: declare Muslims they don’t like to be non-Muslim, so they can justify dehumanizing and murdering them. If this murderer believed himself to be Muslim, so be it. But he was not my brother. My brothers, sisters, and siblings are the ones who were gunned down last night. The ones who now fight for their lives. The ones who must helplessly watch their friends and loved ones suffer. The ones in mourning. I am mourning with you.

“Do not let your hatred of a people prevent you from being just. Be just; that is nearer to righteousness. And observe your duty to God. Indeed, God is acquainted with what you do.” (5:8)

We are not separate communities. LGBTQ people are vital members of every faith and system of life. Though often marginalized, ridiculed, and subjected to violence, LGBTQ Muslims are not Muslim in spite of their gender or sexuality. Many voices have articulated robust anti-patriarchal interpretations of the Qur’an, and current LGBTQ Islamic scholarship is flourishing. There are many scholars, spiritual leaders, and activists producing integral work and revealing expressions of Islam unhindered by misogyny and homophobia, including Dr. Amina Wadud, Dr. Asma Barlas, Dr. Laleh Bakhtiar, Dr. Samar Habib, Afdhere Jama, Dr. Omid Safi, Dr. Stephen O. Murray, Dr. Scott Siraj al-Haqq Kugle, Imam Daaiyee Abdullah, Mahdia Lynn, and Shaykha Reima Yosif (to name only a few). Groups like the Muslim Alliance for Sexual and Gender Diversity, the Safra Project, Muslims for Progressive Values, Al-Rawiya Foundation, MECCA Institute, and the Transgender Muslim Support Network organize for equality and advocate for justice. There are many ways to contribute to dismantling homophobia, transphobia, and misogyny in interpretations of Islam. These intersecting identities need not be in conflict.

I write this at the end of the seventh day of Ramadan, the generous lunar month when Muslims extend ourselves in doing good works and devoting ourselves more completely to God, the Most Gracious and Most Compassionate. All of this begins with conscientious intention; a recommitment to God at every sunrise. Many fast from food and drink, but it’s the fast of the heart that is most important. We refrain from harsh words, give each other more grace, and abstain from anger. But I am keeping company with my anger today. I pray that God will help me maintain my intention and transform my anger into words of benefit. Oh God, don’t let me cling to my despair, and give up my agency to it. Oh God, remove the barriers in all our hearts that keep us from loving one another as we love ourselves. Allow us a glimpse of your Whole love, and let us come awake to our universal siblinghood with each dawn. Oh God, let us listen to others with soft hearts, and amplify the voices of those who are oppressed. Now is the time to uplift LGBTQ voices. Now is the time to protect our LGBTQ siblings, and to stand as a shield between them and embodied hate. Muslims, now is the time to live up to this verse:

“O you who have believed, be persistently standing firm in justice, witnesses for God, even if it be against yourselves or parents and relatives. Whether one is rich or poor, God is more worthy of both. So follow not personal inclination, lest you not be just. And if you distort your testimony or refuse to give it, then indeed God is ever acquainted with what you do.” (4:135)

Adrian Adams Pauw is a Muslim who grew up in Spokane and who is passionate about social justice. Before becoming disabled due to chronic illness, she worked as an academic librarian and professor, specializing in electronic resources and public services. Now, she dedicates her energy to raising anti-racist, feminist, environmentally-conscientious children. She serves on the Spokane NAACP Education Committee, and is an unabashed Spokane Interfaith Council groupie.