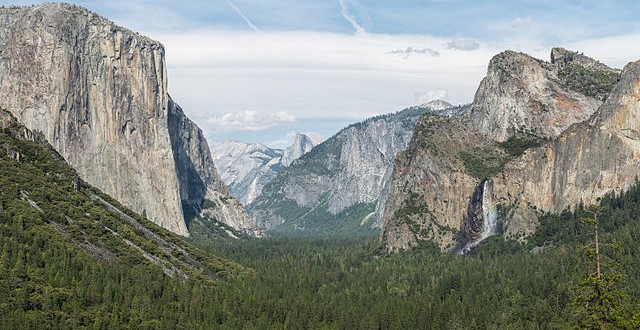 Born in the season of Easter in 1838, John Muir emigrated from Scotland to America and became one of the first and strongest voices for the preservation of wild, natural spaces. Yosemite National Park owes its existence in part to Muir, among many other revered sites. Today, when our ecological situation teeters between despairing and doomed, the witness of Muir and others like him help people of faith engage public advocacy for the sake of the planet.

The state that houses Yosemite National Park, and the glacial valley within it, is currently experiencing a monumental drought. California is rationing water use for the first time, though four major bottled water companies continue to sell water pulled from underground aquifers. What would Muir say about that? What would Jesus say? Every Sunday when my community gathers for worship, I pour clear water from a pitcher into the baptismal font. I always hope it is a sign for Christians to remember who we are: born of water and the word, sent into the world to work for its good. What would that water-sign mean in the heart of California’s drought? Would it look like excess? Would it be somehow prophetic?

Martin Luther’s famous “flood prayer” at baptism declared that because the Lord stepped in the river Jordan at his baptism, all water is holy. An early and wonderful comprehension of the connected water cycle! Another realization that all water is linked comes in Marilyn Robinson’s novel, “Gilead.” The main character, a pastor, is reflecting over his life and writing letters to his young son. He muses that since there is no new water on the planet, only water recycled and returned to us by cloud and rain, all water bears memory of the Great Flood when only Noah and his family and the animals were delivered. All water has been involved in death and destruction. Every puddle on the sidewalk, the pastor thinks, smells of corpses.

We could look at our ecological place and the reality of climate change and see only corpses. Indeed, that is part of the truth we must tell. People are already dying because humans have altered the rhythms of life on the earth. And yet Christians are people of hope. We are bathed and blessed by Christ. We trust that, even in this bleak hour, God can send us to repent of misuse and greed. God can empower us to live differently. God can call us to be with the dying and the hurting, to accompany those who suffer. This hope and trust never means we shut our ears to the groans of creation or ignore the signs of change. Hope is not the same as denial.

Just as God called John Muir from his native soil to this country for the sake of its betterment, God calls us to engage the powers and principalities. Consider this: there is a great amount of fossil fuel still underground that can be burned. But, if even 1/5th of that energy is used, the earth will be utterly un-liveable for creatures like us. It is certain death. Energy companies count that buried fuel as assets. They own it. They bank on it. What are we to do?

Well, at one other significant moment in history, citizens rose up on moral grounds and declared that a resource once considered bankable capital could no longer be thus. It was the abolition of human slavery. People of faith had a voice in that action. No longer could human beings be legally bought and sold. The fight continues with illegal trade in human beings. Can we find a similar voice to speak to the powers in our own time?

All water is holy water, and all air and soil and rocks and trees shine with the sacred touch of their creator. We too have sacred worth and a holy purpose on this earth. This Easter, let us follow the example of John Muir and be brave as we work to preserve and protect the earthly home we share.

Previous Don’t blink, you’ll miss it
Next Spokanite ready to release book on the Haitian experience