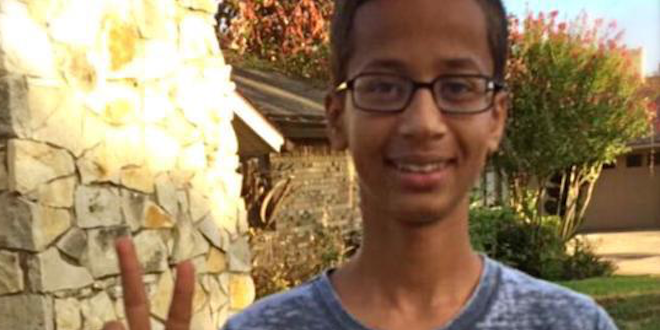 My Twitter and Facebook feeds alike were lit up earlier this week with the hashtag #IstandwithAhmed. Ahmed Mohamed, as you likely know, is a 14-year-old student in Texas. He has brown skin. He is a Muslim. And he was arrested on Monday after he came to school with, and proudly showed his teacher, a clock that he had constructed himself. His school’s administration, and later the five police officers whom they summoned to the school, concluded that his clock resembled a bomb and placed Mohamed in handcuffs.

I suspect that this child’s arrest has captured the imaginations and appalled so many of us for a couple of reasons. One of them is that photograph of Mohamed being removed from his school, his hands bound behind his back and his face a mixture of confusion and hurt, is an icon for injustice. If you have ever endured anything humiliating and unfair, you need look no further than Mohamed’s eyes to see the reflection of your pain.

The other thing that has drawn people far and near to declare that they stand with Ahmed is that his arrest is a startling example of Islamophobia. In particular, it is an example of irrational and evidence-free notion that Muslims are more inclined towards acts of violence than the rest of the population.

Since his arrest, I’ve read a lot of articles about Mohamed. Most of them speak to the question of how we can best respond to this child’s arrest as citizens. Those articles are excellent and, rather than repeating their arguments here, I’d like to wonder with you about a somewhat different question: how can we best respond to this child’s arrest as people of faith? And (because it’s the only religion that I know well enough to talk about) how can those of us who identify as Christians draw upon the tradition that we have inherited to offer moral witness?

When we see a white-skinned child with a homemade clock and say to ourselves, “science genius,” and then see a brown-skinned child with the same clock and say, “suicide bomber,” we are announcing that God made a mistake when God made some of us. And I am pretty reluctant to declare that God makes that kind of mistake. Besides, reflexively assuming that a brown-skinned child is dangerous is representative of an attitude towards my neighbor that I would prefer not to have to explain when Saint Peter checks me in at the Pearly Gates. Come that day, I would much rather be able to tell Peter that, even when it was a struggle for me, I worked hard to keep the promises of my baptism, including the one in which I said that I would respect the dignity of every human being.

One of the ways that we can insist that God’s image is present and strong in our Muslim brothers and sisters is to join in with those who have fought through the temptation to react to Mohamed’s arrest with cynicism or with apathy and, instead, are responding to it with compassion and generosity. I am so heartened, for instance, by the many folks who have reached out to Mohamed to offer encouragement and opportunity to him (I am tickled to note that Canadian astronaut Chris Hadfield is among them: Hadfield has invited Mohamed to visit him in Toronto). It is my hope that you and I will find similarly opportunities to reach out, similar opportunities to choose compassion and generosity.

The Episcopal Priest Paul Gordon-Chandler, who has spent a good part of his ministry living and working in Egypt, has said that, while he is not all that interested in interfaith dialogue, he is absolutely passionate about interfaith friendship. I like Gordon-Chandler’s language a lot. So let’s see if we might make a few new friends. Let’s speak up, lest in our silence our Muslim brothers and sisters begin to wonder if the followers of Jesus are unwilling or even unable to see God’s image in them. Let’s stand with Ahmed.

Previous Can you help FāVS raise $1,000?
Next Colombia peace talks must not fail, says Pope Francis