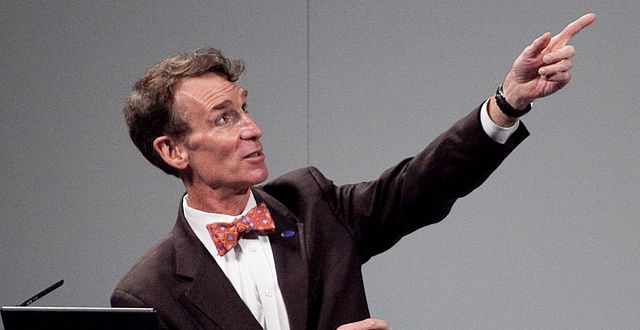 Can a giraffe have a short neck?

One’s answer to that question illuminates the quicksand swallowing up a type of thinking that is based on a reality of beauty, truth and reason and replacing it with adversarial polemic of nihilism and solipsism against objective truth. This is a mentality that walls itself up in arguments that state that nothing is objectively true and the individual is the only definer of reality. The irony of defying absolutism, absolutely, never fails to escape me.

The latest example of this clash of concepts was recently brought to my attention in the Facebook trough by some comments about climate change by Bill Nye.

Could you be jailed for thought crimes? Maybe according to the bow tied, science guy. Below is the video of Bill Nye’s comments in response to a question from activist Marc Morano, a global-warming denier who is also the man behind the film, Climate Hustle:

MORANO: “We interviewed Robert F. Kennedy Jr., the environmentalist… He said that climate “deniers” — his word — energy CEOs belong at The Hague with three square meals and a cot with all of the other war criminals. What is your thought on that? And do you think some of the rhetoric on your side — as I am sure both sides — gets too carried away? What is your thought on jailing skeptics as war criminals?”

NYE: “Well, we’ll see what happens. Was it appropriate to jail the guys from Enron?… So, we will see what happens. Was it appropriate to jail people from the cigarette industry who insisted that this addictive product was not addictive, and so on? And you think about, in these cases — for me as a taxpayer and voter — the introduction of this extreme doubt… about climate change is affecting my quality of life as a public citizen. So I can see where people are very concerned about this and are pursuing criminal investigations as well as engaging in discussion like this.”

There you have it a science guy saying we should possibly jail other science folk if they don’t share the same conclusions about climate change as some other scientists do.

This is an example of the type of polemic thinking that’s permeating our social media landscape. Americans are debating the supposedly “unalienable” rights of our founding fathers. The court of popular culture is putting on trial the freedoms many once considered red, white and blue established political and social truth.”

“We hold these truths to be self-evident, that all men are created equal, that they are endowed by their Creator with certain unalienable Rights, that among these are Life, Liberty and the pursuit of Happiness.”
–http://www.archives.gov/exhibits/charters/declaration_transcript.html

If we examine a lot of the American political and social debates today, we can trace the arguments right back to the freedoms in our Bill of Rights:

Almost every hot button issue today: religious concience, gun laws, laws relating to personal choice or self-perception, matters of security, searches and privacy can be traced back to the US Bill of Rights:
http://www.billofrightsinstitute.org/founding-documents/bill-of-rights/

-9th Amendment
“The enumeration in the Constitution, of certain rights, shall not be construed to deny or disparage others retained by the people.”

-1st Amendment
“Congress shall make no law respecting an establishment of religion, or prohibiting the free exercise thereof; or abridging the freedom of speech, or of the press; or the right of the people peaceably to assemble, and to petition the government for a redress of grievances.”

-2nd Amendment
“A well regulated militia, being necessary to the security of a free state, the right of the people to keep and bear arms, shall not be infringed.”

-4th Amendment
“The right of the people to be secure in their persons, houses, papers, and effects, against unreasonable searches and seizures, shall not be violated, and no Warrants shall issue, but upon probable cause, supported by Oath or affirmation, and particularly describing the place to be searched, and the persons or things to be seized.”

-10th Amendment
“The powers not delegated to the United States by the Constitution, nor prohibited by it to the states, are reserved to the states respectively, or to the people.”

When examined in this light, it’s easy to see why many Americans are locking horns with those who are fighting to redefine or reimagine America’s law, history and moral self understanding. The danger that’s developing is how this lawlessness is eroding our ability to think about truth, reason and reality.

G.K. Chesterton brilliantly tackles these issues in chapter 3 of his book ‘Orthodoxy‘ called “The Suicide of Thought”:

“Anarchism adjures us to be bold creative artists, and care for no laws or limits. But it is impossible to be an artist and not care for laws and limits. Art is limitation; the essence of every picture is the frame. If you draw a giraffe, you must draw him with a long neck. If, in your bold creative way, you hold yourself free to draw a giraffe with a short neck, you will really find that you are not free to draw a giraffe. The moment you step into the world of facts, you step into a world of limits. You can free things from alien or accidental laws, but not from the laws of their own nature. You may, if you like, free a tiger from his bars; but do not free him from his stripes. Do not free a camel of the burden of his hump: you may be freeing him from being a camel. Do not go about as a demagogue, encouraging triangles to break out of the prison of their three sides. If a triangle breaks out of its three sides, its life comes to a lamentable end.”

“That peril is that the human intellect is free to destroy itself. Just as one generation could prevent the very existence of the next generation, by all entering a monastery or jumping into the sea, so one set of thinkers can in some degree prevent further thinking by teaching the next generation that there is no validity in any human thought.”

“The new rebel is a Sceptic, and will not entirely trust anything. He has no loyalty; therefore he can never be really a revolutionist. And the fact that he doubts everything really gets in his way when he wants to denounce anything. For all denunciation implies a moral doctrine of some kind; and the modern revolutionist doubts not only the institution he denounces, but the doctrine by which he denounces it.

“In short, the modern revolutionist, being an infinite sceptic, is always engaged in undermining his own mines. In his book on politics he attacks men for trampling on morality; in his book on ethics he attacks morality for trampling on men. Therefore the modern man in revolt has become practically useless for all purposes of revolt. By rebelling against everything he has lost his right to rebel against anything.”

Can a giraffe have a short neck?

It appears so, if you buy this typed of flawed thinking that’s being regurgitated today. This is a critical time for conservative leaning, concerned Americans to resist the temptation to believe that a president can make ‘America Great Again’ and instead return to the faith and reason that made America great.

Previous How Christian music helped me
Next Viewpoints: Do you believe in the right to die?