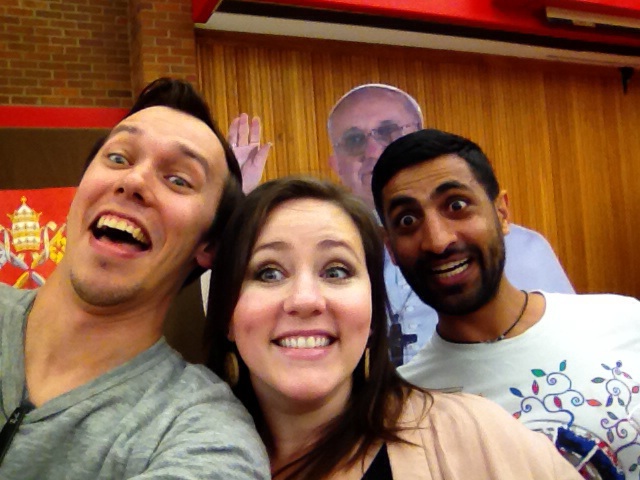 Lessons I learned from hanging out with the pope. Sort of…

I spent the weekend with Pope Francis.

Well… Not exactly. A friend of mine lent her cardboard cut-out of the supreme pontiff to me for a special project I had to carry out on a college university. For three days, Frank and I — yes, we’re close enough to be on a first-name basis —spent time together. In my house, on a college campus and in the car, it seemed that no matter where I was, Frank was teaching me a lesson in his own unique way. And while the real pope was thousands of miles away, Frank reminded me of a few good things to apply to my daily life—whether at the Vatican or walking down Riverside.

1: Frank is unassuming.
Whether he’s flying economy, or checking out of his own hotel himself, Pope Francis is famous for his modesty, and down to earth approach to life. Which is probably why he was comfortable being folded into the backseat of my car and driven to campus. Along the way, people waved back at the two of us as they passed us on the highway. They probably thought what is the Pope doing in that old car?! I was thinking it. As a recent college graduate, La Vie Bohème is something I probably live until my student loans are paid off… in what feels like 2079. I tend to find myself enraptured with material wealth and status as is something that pervades our culture. I also tend to want this in my spiritual life as well. The closer we are to the source, the more “holy” we are considered… Right? Not only has the real Francis spoken out about this[1] and Frank was no different. Both have shunned the spotlight. Sitting in the back of my car, the message was clear: it doesn’t matter where you’re sitting or what you’re wearing. It matters what you’re doing.