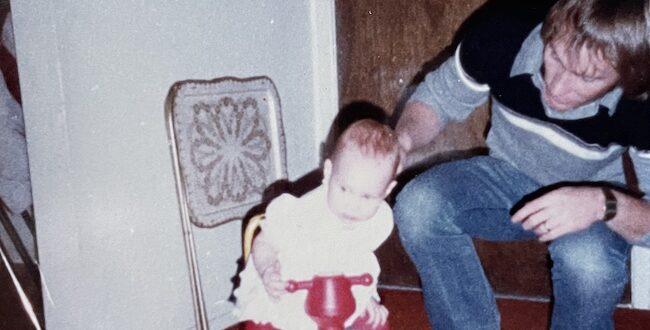 Tracy Simmons on her first birthday, with her dad/Contributed

Every now and again, churches ask me to be a guest speaker, so last month I had the pleasure of Zooming in to the North Idaho Unitarian Universalist congregation. They asked me to talk about navigating our increasingly polarized society. I couldn’t help but tell a story about my dad.

When I was 27, working as a reporter during the Obama-Romney election, I remember getting a text from him. He said if a Black person won, he was moving (he used a much worse word, though).

I was angry and frustrated, and worse – disappointed.

I didn’t know my dad very well and had recently reconnected with him – again.

I wasn’t quite 2 years old when my dad first left. Yet I idolized him. In my mind he was a stalwart cowboy off doing all-important cowboy things, and I fantasized about meeting him.

I was about 6 years old when he called for the first time and said he wanted to see me. Reluctantly, my mom drove me to the corner gas station where he was waiting.

I wrapped my arms around his legs. And for about two weeks, he was my hero.

He took me to Chuck E. Cheese, my cousin’s birthday party, taught me how to ride my bike.

But then he left.

Thirteen years went by before I saw him again. It was at a Louisiana airport.

By now, my strapping cowboy dad had changed. Now he was dirty and gaunt and he seemed to plead forgiveness with his deep blue eyes.

So I fell again – into hope and fantasy.

Our relationship was off and on after that. By the time his text about Obama came, I had been reporting on religion for several years. The beat changed me from being closed-minded and rejective. I now valued diversity, equality and social justice.

I wanted everyone else to also, including my dad. But his text reminded me that his personal values didn’t match mine. How could I ever truly connect with this person?

How many of us have felt that way about our neighbors in recent years? Our friends? Our family?

I was tempted to give up on trying for a relationship, but something hallowed reminded me that he had potential to be more than what I saw on the surface. We both did.

Each morning, I read Buddhist meditations and recently read this one, written by Ven. Thubten Chodron of Sravasti Abbey:

“We must differentiate between a person’s harmful actions and the person who did them. The action might be abhorrent, but that doesn’t mean the person who did it is evil. Why? Because the person has Buddha-nature, the possibility to become fully awakened. The fundamental nature of their mind is pure and untainted and can never be defiled. Saying a person is evil or hopeless is like saying the Buddha lied when he taught that all sentient beings have the possibility to become fully awakened.”

It reminds me of my dad, but also of our divided communities right now. Especially since the 2016 election, probably most of us have encountered at least someone in our life who has let us down with their political stance.

Hate and polarization seem to be all around us. Over vaccinations, global warming, political candidates, religion – I feel separated from lots of my friends on Facebook, from my family, from my actual neighbors.

So what do we do?

My dad had racist views. He abandoned his family. Those aren’t good. But, dare I say, he wasn’t nefarious?

There was good in him, just like there’s good in those around us with whom we disagree.

I have to remind myself that I too have done hurtful things – things that have made others mad, maybe even made them loathe me.

Maybe they despise me right now for having written a column about being queer, or because I’m a journalist, or because I posted a social media selfie with my vaccination card.

We aren’t the only ones disenchanted right now, yet we’re all in this together.

How do we trust each other again? How do we love each other, so that harmony triumphs, instead of trepidation?

We have to respect each other.

By finding regard for my dad – despite his demerits and our differences – I was able to see what was behind those blue eyes: His buddha-nature. Just like all of us here, he too was capable of the luminous mind; it was in him somewhere.

Understanding that he wasn’t a lost cause is how I came to find compassion and empathy toward him, and it’s how I’ll come to appreciate those with whom I disagree.

What would it look like if we joined as partners with those we’re so upset and disappointed with right now, for the sake of humanity?

It would be a step toward peace and restoration.

Recently one of my columnists at SpokaneFāVS, Steve Smith, wrote, “as flawed as we may be, all of us instinctively know we can be redeemed by the actions we choose to take in the here and now. It is on us to live life well, to think about our fellows, and do for them as we would have them do for us.”

I want people to see whatever righteousness is in me, because maybe that’s what will help it grow. So I need to do the same for them.

My dad died about 12 years after I met him in that airport. Our relationship was far from perfect. But I’m grateful for the glimpses of goodness I was able to see in him, because it taught me about forgiveness and selfless love, and now I’m ready to see how we can all find common ground and together make this community better.

Previous Supporting Our Reporters: Meet Riley Hahn
Next Like A Kid Again