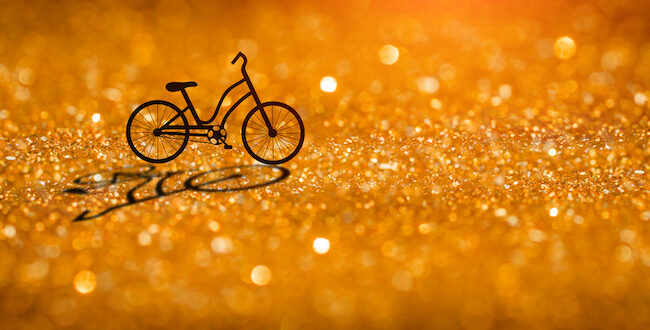 Silhouette of a bicycle on orange sparkling glitter background/DepositPhoto

Lesson From A Girl’s Bike: Who Cares What Others Think?

Lesson From A Girl’s Bike: Who Cares What Others Think?

I still remember the excitement of my first bike. I raced to my friend’s house, banged on his door, and gushed about how cool it was.

But he looked funny.

“Check out my bike, ain’t it great!” It was purple, had a banana seat and streamers in the handle bars.

And he looked at me funny again. He pointed at it. He said, “That’s a girl’s bike.”

Then he looked at me. He repeated, “But it’s a girl’s bike, Jimmy.”

He explained it to me.

It was a slow ride back home.

I had a bike. I liked riding bikes. I didn’t like being seen on a girl’s bike. So  I learned to ride fast in and out of alleys. I wasn’t going to let one hurdle keep me from riding.

But I did park it down the street and walked some of the way.

What people think of me may matter, but sometimes I care what others think about me more than I should. How someone may see me should not outweigh how I perceive myself.

I have had confidence, and less of a concern for what others thought. And I have found my confidence shot.

The lower my self-esteem would sink, the more the opinions of others mattered to me.

It became more an issue of respect. The less I had for myself, the greater the need I felt to receive it from you.

I had something to prove, when I had less and less of what was worth holding on to.

I was driving down a side street by the House of Charity and I stopped to let a man cross the road, with plenty of room to show respect. He didn’t walk straight across, he came toward me, at an angle that took the longest to cross, at a pace as slow as he could possibly go and still be moving. He wanted to make sure I had to wait for him. Perhaps he felt a need to exert control. Something to prove.

I have known losing hope over what has happened in this world. I have seen life head south fast. Poor decisions come easy when the inertia of an oncoming train is barreling down and options are few.

I remember how I felt as my life spun out of control. I became somebody who did what I thought I would never do.

I had a cat I loved very much. One of the best pets I ever had. That poor cat was stuck with me at one of the lowest points in my life. I moved into my mom’s basement after causing my family to lose our home because of my drug use.

I put that cat in a drawer one morning before I went to work. It was stuck in there all day. I had never purposely hurt an animal with ill intent in my life. When circumstances crashed, through my own fault I admit, I acted in ways I wish I never had.

Doing what I knew was wrong, and feeling care and concern become an enemy in me, disturbed me to the core. It was a steep climb out of the ditch that my tail spin buried me in.

I remained in drug addiction for many years to come, and continued to make poor decisions, but somewhere along the line I decided not to let the darkness take full control.

It was a three-fold war, between my heart, my head, and what I did.

I reached for good words to share, when bitterness held tight in my throat, and held back what I felt like doing for what I knew was a better act to commit. I reached for light in the murkiest shades in my dark life. I tried.

I did not do the best, but I made sure the worst was erased off my list.

I made concern become a deciding factor over what I might be going through at the time. Something outside of myself. Because what was inside had gone so dim to let it have control would take me further down than I was willing to continue to go.

In better times and worse, in safety and in harm, and in times nearly unable to stand, I did not ignore a compass there to help guide me along the way.

Seeds were planted that I fed and watered and it was me that began to grow. New light began shining within a darkened soul.

I did not get clean for over a decade later, and that I could not have without God. I may not have liked how I was or where I was found, but I chose to hold a commitment to something. Even if that something was someone that I simply refused to be.

I dug myself deeper than stuck riding some stupid purple girl’s bike. I discovered  there is more than what anyone might think, including myself. There is what I do, and what I refuse to, that helps bring meaning to who I believe we can be.

I’ll meet you there.