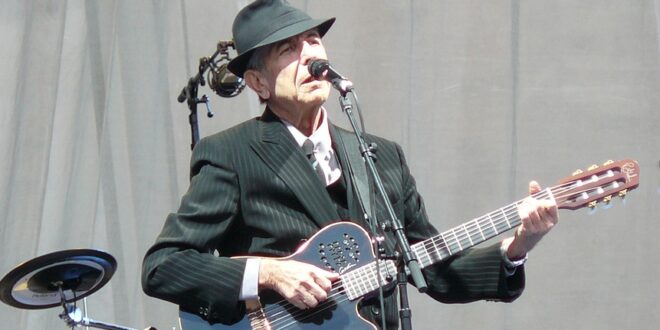 Singer-songwriter Leonard Cohen was a Jew whose faith was always in flux. He was a poet. He was a restless soul who sought answers to questions about Judaism and the nature of humanity. He was a spiritual disciple who delved deep into his own tradition and Zen Buddhist practices. He was a lover. He was, maybe most importantly, a man with a holy and broken hallelujah.

As far as biographical documentaries go, “Hallelujah” is one of the best because it’s a full-fledged and fascinating exploration of culture, Cohen and “Hallelujah” rather than just a glorified Wikipedia page.

The song “Hallelujah” is maybe Cohen’s most poetic, a story of the decline of his relationship both with a woman and with God. It references the stories of David and Bathsheba and Samson and Delilah with a focus on sex and consequence. It ends — before an extended hallelujah chorus — as Cohen proclaims, “And even though it all went wrong / I’ll stand before the lord of song / With nothing on my tongue but hallelujah.”

Maybe the most important aspect of the song is the way it effortlessly universalizes the “hallelujah” cry. Humanizing biblical heroes and exalting man’s love, the song recognizes the complexity of human nature and acknowledges everyone, on some level, as broken.

From the beginning, “Hallelujah” is presented as Cohen’s white whale of songwriting. The song was released on “Various Positions” in 1984 over a decade after his career began, but he’d been working on the song for years before then. Cohen wrote over 80 verses for it, most of which were never used. Many of these, he said, contained even more biblical references that bordered on the obscure; finalizing the studio version was really just about deciding how spiritual the song would be.

But “Various Positions” was far from a success because the studio disliked it, and it wasn’t released in the U.S. The only widespread recognition “Hallelujah” got in the beginning came from Bob Dylan, who performed live covers of the song on tour.

By 1988, Cohen decided that the album version may have been too spiritual, as he was in a period of his life when he didn’t feel as close to God. On tour that year, he began singing a different version that incorporated more verses about sex and the singer’s romantic relationship, replacing the ones that center on the singer’s relationship with God. That’s when the song’s legacy really began.

The documentary describes the resulting family tree of musicians, record labels and others who heard the song and decided it was worthy of a recorded cover (which makes for another fascinating subplot exploring the music industry).

It boils down to this: The song particularly struck artists with the same type of sensual spirituality Cohen had, whether explicit or implicit. It’s often referred to as a song that sounds like a prayer, and listening to that song is reminiscent of being in church.

Brandi Carlile, the singer-songwriter who rose to popularity in the late aughts, says in the documentary that the song helped her reconcile being a lesbian with her Christian faith.

A lot of people would argue that the most famous rendition of “Hallelujah” is Jeff Buckley’s. Buckley himself was regarded as “Christlike” from the moment he entered the public eye with a performance at St. Ann’s in Brooklyn as part of his estranged father’s memorial service. The inclusion of the song on his debut LP solidified this spiritual aura Buckley carried with him on stage.

Of course, anyone my age would tell you that the most famous rendition of “Hallelujah” is Rufus Wainwright’s — because it’s featured in the “Shrek” soundtrack.

Yes, the documentary does go into the “Shrek” story as well, and is perfectly tongue-in-cheek about the fact that one of the most moving songs of all time is so strongly associated with an animated feature about an ogre and his donkey sidekick. It’s a particular success on the documentary’s part to be so thorough about so many things and still remain thoroughly engaging.

A song so powerful could have only come from Cohen, who was as spiritually complex as his music. From a Jewish family, he was poetic and introspective about his religion, just as he was about the rest of his life. More songs than just “Hallelujah” have spiritual inspiration: Popular songs include the prayerful “If It Be Your Will” and “Who by Fire”, which was adapted from a Yom Kippur prayer. In “You Want It Darker”, the song released shortly before his death, Cohen calls, “Hineni, hineni / I’m ready, my Lord,” using the same Hebrew word Abraham uses when God asks him to sacrifice his son Isaac.

Cohen was proudly Jewish, refusing to change his name as many other prominent Jews did during the 1950s and ’60s. It’s also very clear that the practice of his faith was a deeply spiritual one. At age 40, he studied the Kabbalah, a discipline of Jewish mysticism; he once claimed to have been visited and inspired by Shekinah, the feminine personification of God in Jewish teaching whose name means to “dwell” in the presence of God.

He also held a longtime interest in Zen Buddhism and took retreat in the Mt. Baldy Zen Center outside Los Angeles, California, for five years starting in 1994.

This wasn’t so much an attempt at switching his belief system as it was the chance for quiet introspection and healing, finding peace in the rhythm of monastic life and finding himself in God. Cohen achieved these things in small measure but through the rest of his life was never fully cured of his spiritual affliction; he still harbored questions, flaws and self-doubt.

Cohen’s inner turmoil and pursuit of the spiritual make him a fascinating artist and are part of the reason why his music made such a long-lasting, widespread impact.

Understanding and leaning into those complexities makes “Hallelujah” a riveting documentary. It inspires a reverence for Cohen and the same introspection about his work, God and humanity the artist himself had. For the right viewer, it may even inspire a “hallelujah.”

Jillian Cheney is a contributing culture writer for Religion Unplugged. She also writes on American Protestantism and evangelical Christianity and was Religion Unplugged’s 2020-21 Poynter-Koch fellow. You can find her on Twitter @_jilliancheney.