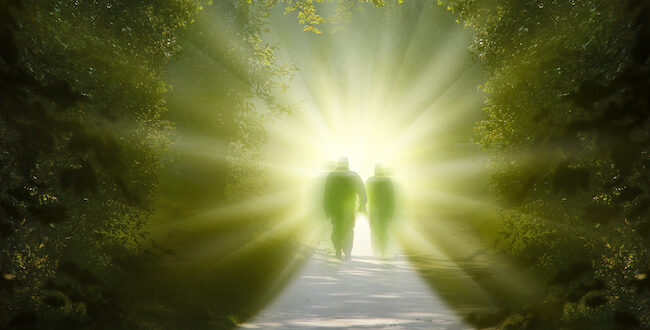 Two people are walking into the light/DepositPhoto

Last Judgment as Self Judgment

Last Judgment as Self Judgment

When I’m not rushed, I enjoy reading the obituaries. Now that families have the option of writing their own, it makes for much more interesting reading. What blows me away, however, is many overtly religious families believe that somehow their dearly departeds are already in Heaven.

I learned something quite different in Sunday School. I was taught that at the end of time Jesus would harvest his human crop, and just as the farmer separates the wheat and the chaff and destroys the latter, so, too, will Jesus throw the wicked into a furnace of fire. Only then, not when they die, will the righteous “shine like the sun in the kingdom of their Father” (Matthew 13:43).

As a Unitarian Universalist, who rejects the Trinity and the existence of hell, it appears to me that, ironically, many who reject us outright may have joined us in committing the heresy of universal salvation. Or more accurately, these Christians have preempted God’s prerogatives in deciding who will be saved and who will be damned. Surely, that is God’s decision not ours. In my mind, the latter offense is far worse than the former. Even the closest families could not claim to know the hearts of their nearest kin.

The issue of good deeds is of course a moot point if you are strict Calvinist believing in predestination. Calvin was so keen on preventing anyone from earning their own salvation that he took an obscure passage in Ephesians—“even as God chose us in him before the foundation of the world” (1:4)—to imply that your wicked neighbor is going to Heaven and your virtuous life has meant nothing.

If one reads the Old Testament carefully, however, it looks as if all of us are destined for Sheol, the Hebrew equivalent of Hades. The author of Ecclesiastes sums it up well: “The fate of the sons of men and the fate of beasts is the same. . . All go to one place; all are from the dust, and all turn to dust again” (3: 19-20).  Job despairs of any hope for resurrection: “Before I go, never to return, to a land of darkness and gloom [Sheol]” (10:21).

Inspired by the “Tibetan Book of the Dead,” I would like to propose that we take the Last Judgment seriously, but we should reformulate it in terms of self-judgment. Buddhists who are guided by expert lamas and people who report near death experiences both speak of moving through a dark tunnel with a great being of light at the end. Christians identify it as Christ, and Buddhists of course say it’s the Buddha.

Consistent with Universalist belief, this great being is not judgmental but filled with compassion. A life review commences and spiritual pilgrims embrace their good deeds and struggle acknowledging their faults. Tibetans who fail to come to a full accounting of their lives are destined to yet another life in the karmic cycle.

I personally have a lot of problems with the concept of reincarnation, so what I suggest is something that John Adams hinted at this cryptic remark: “I believe in a future state of rewards and punishments, but not eternal.” What I infer from this is that Adams did not believe that finite sins require eternal punishment and that humans should be able to atone for their shortcomings and be released from punishment.

I would also like to borrow a central idea from Jean Paul Sartre’s play “No Exit.” In our earthly lives, we can get away literally with murder and we can easily deceive ourselves about how bad we are sometimes. But in the afterlife it is different: Sartre’s shifty character Garcin admits that “we’re naked, naked right through, and I can see into your heart.” And he speaks the famous line: “There’s no need of red-hot pokers. Hell is other people.”

I’m more optimistic than Sartre. I believe that most of us, without the protection of our normal deceits, will eventually own up to everything that we’ve done and finally be a peace with ourselves. At this point we will have reached Nirvana and that will be the end of it.

P.S. Since I wrote this article many years ago, I believe that a good Buddhist would say “self-acceptance” rather and “self-judgment.” All judgment, whether it is against others or one’s self, will accrue karma.

Read more on the views of the Afterlife here.

Previous Earth Day vigil in Spokane seeks to unite those experiencing ecological devastation with those working on remediation
Next Ask An Eastern Orthodox Christian: Blasphemy of the Holy Spirit