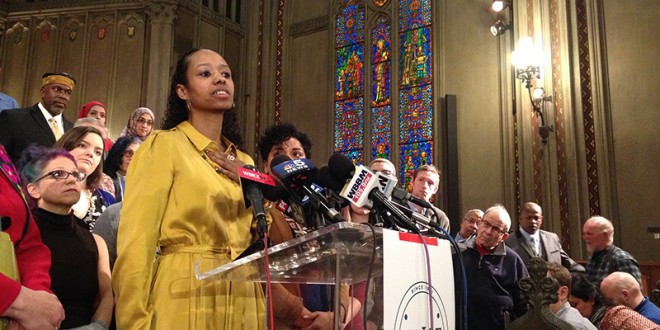 Larycia Hawkins ‘flabbergasted’ by Wheaton’s move to fire her

CHICAGO (RNS) Wheaton College professor Larycia Hawkins says she is “flummoxed and flabbergasted” by the evangelical flagship’s decision to begin dismissal proceedings against her for expressing the belief that Muslims and Christians worship the same God.

Speaking at a press conference in the sanctuary of Chicago’s First United Methodist Church on Wednesday (Jan. 6), Hawkins reiterated that she has not wavered from the college’s statement of faith.

“Wheaton College cannot scare me into walking away from the truth (that) all humans — Muslims, the vulnerable, the oppressed of any ilk ­– are all my sisters and brothers, and I am called by Jesus to walk with them,” she said.

Hawkins’ remarks came the day after she received a “Notice of Recommendation to Initiate Termination-for-Cause Proceedings” from Wheaton, the evangelical Christian college confirmed in a statement on its website.

The tenured political science professor, who has taught at Wheaton since 2007, had posted a photo of herself wearing a hijab on her personal Facebook page on Dec. 10. She wore the Muslim head-covering throughout Advent, the Christian season preceding Christmas, according to Arise Chicago, an organization that builds partnerships between faith communities and workers to fight workplace injustice.

It wasn’t the hijab that gave Wheaton pause, the college has said, but the caption the professor posted with the photo: “I stand in religious solidarity with Muslims because they, like me, a Christian, are people of the book. And as Pope Francis stated last week, we worship the same God.”

She since has made additional posts on Facebook and Twitter reaffirming that Muslims and Christians worship the same God.

That seems “inconsistent with Wheaton College’s doctrinal convictions,” according to the college. All faculty members are required to sign Wheaton’s statement of faith when they join the college.

The college also charged Hawkins with an “unqualified assertion of religious solidarity with Muslims and Jews,” she said.

But Gene Green, professor of New Testament at Wheaton, said, “What’s the problem?” Hawkins has given the college a “clear and detailed affirmation” of its statement of faith, Green said, and many on campus are confused about why there are continuing doubts.

His department likely will take up the question of whether Muslims and Christians worship the same God when classes resume this month — but, he said, he doubts there will be consensus. “That’s the beauty of it,” he said.

Several religious leaders, including the Rev. Jesse Jackson and Ahmed Rehab of CAIR Chicago, the local chapter of the Council on American-Islamic Relations, expressed their support for Hawkins.

It “did not to me cause me to wonder whether she was diluting the message of Christianity, but rather taught me what Jesus is about,” Rehab said.

The college placed Hawkins on paid administrative leave Dec. 15, and she responded in writing to questions regarding her theological convictions two days later. The provost assured her that would be sufficient, she said, before she was asked for further theological discussion and clarification.

To Hawkins, it felt like “the rules changing, the goalposts keep moving,” and she declined to answer more questions. She and Wheaton now have reached what the college has termed an “impasse.”

As of Wednesday, a change.org petition titled #ReinstateDocHawk had gathered more than 54,000 signatures. That hashtag was being used by the professor’s supporters on Twitter, while those supporting Wheaton’s action took to #ThankYouWheaton.

Hawkins said she made some “3,000 new Muslim brothers and sisters.”

The professor said she believes she will get a fair shake from the faculty personnel committee as, she said, “their fate is bound up in my fate.”

The board will make a final decision regarding Hawkins’ employment with the college.

(Emily McFarlan Miller is a contributor to RNS)

Previous Their Blood Still Cries Out: A defense of executive action on gun violence
Next Hunting Love