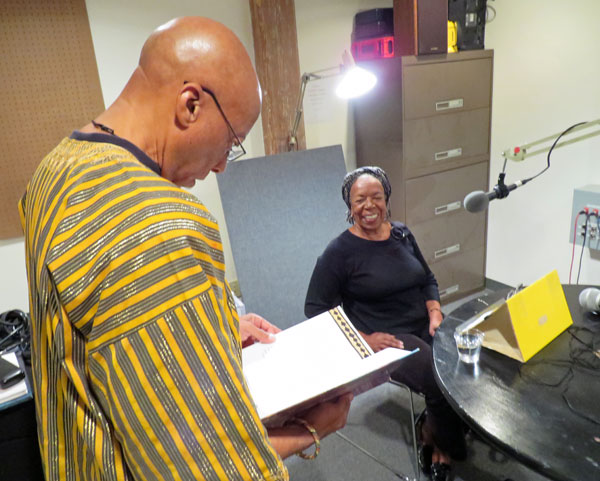 Only Kwanzaa public radio program in the U.S. continues its tradition after 20 years

WILMINGTON, N.C. — It was mid-October, but the two storytellers were planning for Kwanzaa in late December.

Wilmington storyteller Joyce Grear and Madafo Lloyd Wilson, longtime storyteller and host of “A Season’s Griot,” were dickering over which story she should read this year. They sat in the wide, barren conference room between radio studios at WHQR Public Radio where “A Season’s Griot” has been produced for more than two decades as the only nationally syndicated Kwanzaa radio show in the country.

One was a Japanese tale; the other was a version of an Aesop’s fable about the baobab tree.

“Ahh, this is great,” Wilson said after finishing his reading, tapping the book with his finger. “This is the story.”

“How did you come to that,” Grear asked.

“The tree, the image of the tree, the little girl helping the elder,” he said. “This is what the show’s about.”

This year’s one-hour storytelling show honoring  the African-American holiday Kwanzaa  features the theme of fatherhood and airs on WHQR 91.3 FM at noon Thursday (Dec. 26) on the first day of Kwanzaa and will re-air at 7 p.m. Dec. 29 on WHQR. Kwanzaa is celebrated from Thursday (Dec. 26)- Jan. 1.

Kwanzaa resonated with Wilson from a young age.

“The principles are the main focus of the show. They’re so real and make sense, they’ve always made sense, common sense,” he said. “I try to live up to the principles every year, throughout the year.”

In past programs, Wilson has used stories that represent certain Kwanzaa principles. Last year, the show told the story of a woman who was being robbed and instead of reporting the robber to the police, she took him to her home and fed him – illustrating the Kwanzaa principle of Ujima. Wilson often chooses his themes based on the mood or local or national news events of the moment.

“We’re always speaking to the community’s stories, needs and struggles. It’s a treatment of what’s happening now in our stories. We’re speaking directly, this year, to the gang,” giving facts in the show about incarceration and the impact of fatherless homes on society.

“A Season’s Griot” began with funding through Public Radio International and, though the program is still syndicated, it’s now funded through the radio station and arts grants, “so we’re not bound as much by rules,” said Mary Bradley, the show’s producer and WHQR development director. “The production of the show at the end is always so fun.”

In the studio, Grear read the story of the baobab tree in one room as WHQR news producer Asia Brown, Bradley and Wilson listened in the adjacent sound booth. Wilson underlined words he thought needed editing or re-recording.

And to accompany that organic story format, Wilson’s music is another character in each “A Season’s Griot,” though in the beginning, the show had very little music, Wilson said. Whether it’s the tinkling water sounds of the thumb piano or an African spiritual, Wilson sets the tone for the stories.

“For many black people, music is major. When we talk, walk, cry, and being a musician, I thought why not?” he said. “Music is a part of everything.”

Each year, the show offers a different element of storytelling. One year the show featured spoken word artists. In 2006, a national troupe of storytellers called the Kings and Queens of Storytelling told the stories. Last year, fifth and sixth grade children read poems, and the program also included on-the-street interview with people about peace.

One man said: “Peace is the essence of living in tranquility, the awesomest, most coolest point in existence.” This year, African-American city and community leaders will read the principles of Kwanzaa.

LISTEN to one of the street interviews here.

The show also has its own “poet laureate,” Beverly Fields Burnette, a Raleigh poet and president of the N.C. Association of Black Storytellers. Each year, she writes a poem to be read on “A Season’s Griot.” This year, her poem addresses community leaders after the Trayvon Martin shooting.

For Grear, listening to the show is “a touchstone for me and for my nieces and nephews. There’s always something in that show that I’m trying to teach them. I’m looking for that moral or lesson or values to back what I’m saying to them,” she said. “The griot is one consistent thing I can count on.”

Over the years, the program has garnered a national following, broadcast last year on 134 stations in most major markets from New York to California, Alaska and Hawaii.

“We make it available through Black History Month, and we get a lot of requests for it from teachers all over the country,” Bradley added.

One of Wilson’s favorite tales of the impact of “A Season’s Griot” was when he “heard from a lady once who said she was getting ready to go into the grocery store and heard the program and just could not get out of her car. She sat there in the parking lot listening,” he said.

“The show vibrates and changes as we go, and that’s the beauty of it.”

Previous Ask A Mormon: Are there positive, realistic portrayals of Mormons in pop culture?
Next Peace! Why you can expect a ceasefire on the ‘War on Christmas’ until Thanksgiving 2014