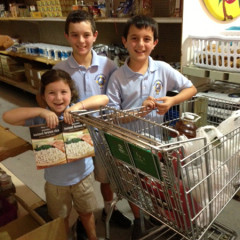 As the director of a kosher food pantry outside Detroit, Lea Luger knows that some people have a hard time thinking that Jews anywhere in America could be short on food.

“For many years, one of our biggest hurdles was convincing Jews and non-Jews that a need existed,” said Luger, executive director of Yad Ezra, which serves 1,400 families a month, up from 250 a month when the pantry was founded in 1990.

“It’s just like people didn’t want to believe that Jews could be alcoholic, or beat their wives.”

Jews are generally comfortable in the U.S., with incomes, life expectancies and education levels above the national average. America, in the words of historian Howard M. Sachar, gave Jewish immigrants who were persecuted in the Old World the chance to create another “Golden Age” in their history. That idea remains deeply ingrained in American Jewish culture.

And that may be why the idea of American Jews struggling to put food on the table so often does not compute. Though there are no recent national statistics, anecdotal and other evidence points to a growing portion of Jewish Americans who are struggling and need the help of food pantries.

Demand at kosher food pantries around the nation is up, their directors report. And the authors of a 2011 survey of Jewish New Yorkers shocked many within and without the Jewish community.

It revealed that Jewish poverty has risen in the past decade and increased at a faster rate than poverty among other groups.

One in five of the 1.7 million Jews in the New York area — the largest Jewish community in the nation — now live in poverty or near poverty. The study’s authors noted the proliferation of fervently Orthodox families — who, more than less observant Jews, shoulder the expense of Jewish schools and keeping kosher.

For those Jews who do keep kosher — about 21 percent of the 5.3 million American Jews overall, according to the most recent National Jewish Population Survey — hard times mean particularly scant options for feeding a family, which, among the most religious Jews, tend to be large.

“If you don’t need kosher meat or juice, you can go to any public food pantry,” said Bonnie Schwartzbaum, coordinator of the Jewish Community Services Kosher Food Bank in North Miami Beach. “If you’re kosher, you need a kosher chicken.”

That’s where kosher food pantries come in, to serve a clientele with very specific and relatively expensive dietary needs.

For traditionally minded Jews, keeping  the Jewish dietary laws written in Leviticus means not eating pork or shellfish, or dairy and meat in the same meal. Observant Jews search for the “hechsher” symbol on food labels, which certifies that they were produced under rabbinic supervision.

The exacting rules of the kosher certification process increase the price of food, making a kosher version reliably more expensive than the non-kosher alternatives. Store-brand chicken breasts at a Giant supermarket in Washington, D.C., this week, for example, sell for $5.29 a pound; kosher chicken breasts: $7.69 a pound. At that same store, a 64-ounce bottle of Kedem kosher apple juice costs $3.99; the same size bottle of the store brand costs $2.59.

Schwartzbaum, in North Miami Beach, serves 1,000 people a month — including 119 Holocaust survivors — a 20 percent increase in the past two to three years, she estimated. When she talks to other directors of kosher food pantries, she said, “It just seems like everybody is overwhelmed with need.”

Those needs are met at her food pantry with a combination of in-kind donations — the largest portion of which come from students at area Jewish schools — and financial support from the Greater Miami Jewish Federation. The synagogues that support the pantry range from Orthodox, where almost all members keep kosher, to Reform, where few do.

Don Meissner, community outreach coordinator at the Harvey Kornblum Jewish Food Pantry in St. Louis, which offers kosher and non-kosher food to both Jewish and non-Jewish clients, said some people wonder why poor Jews don’t stretch their budgets by giving up on keeping kosher.

“Just the other day I was talking to this very nice Jewish family who doesn’t keep kosher and they said, ‘If people are falling on hard times, can’t they eat whatever?’”

“If you’re starving you can eat all the shrimp and bacon you want,” Meissner said, referring to the Jewish teaching that suspends nearly all other religious obligations when a human life is at stake.

But short of that, he said, “It’s not ‘take your damn food and go.’ Give them some food they can feel OK about.”

Meissner, like his counterparts in Detroit and North Miami Beach, reports far greater demand at his food pantry, which now serves 5,000 people a month. In each of the past few years, he said, the number of clients of all faiths has increased by at least 10 percent.

Most people are not surprised that a struggling economy has increased demand on the food pantry, Meissner said, but some people — Jews included — do not understand that Jewish people are among the needy.

“There’s this misconception that Jews are uniformly successful,” he said,  “and that’s never been the case.”

Previous Controlling the uncontrollable
Next In 2012 I learned I am loved, valued